Jackie Chan on Son’s Release from Prison: “I’ll Spend More Time With Him” 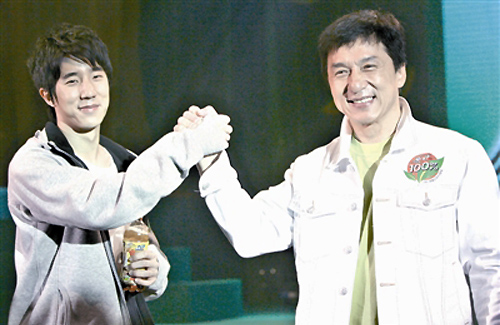 On the same day of Jaycee’s release, Jackie was promoting his new film Dragon Blade <天將雄獅> in Taiwan. Asked for his thoughts on Jaycee, Jackie said he is extremely proud of his son for completing his prison sentence. He saw prison as a positive experience for Jaycee, “Young people make mistakes. I also made mistakes when I was young. We should all learn from our mistakes, and I hope everyone will give him the opportunity to change.”

Jackie said he was very angry when he first heard the news of Jaycee’s arrest, explaining that he and his wife Joan Lin (林鳳嬌) never knew that Jaycee had smoked marijuana. Jackie was so angry, he even asked his lawyer to slap Jaycee for him. Jackie felt relieved when Jaycee was arrested, as he believes Jaycee will turn over a new leaf.

Jackie said, “When the incident happened, I was in shock. Then I felt ashamed. I felt terrible. I was able to forget about it for a while when I was filming my movie stunts, but after returning home from work, I’d think about him again.”

Proud of Jaycee’s development in prison, Jackie said his son read a lot more books than usual, and learned how to take care of himself without the need of others. Jaycee had matured far beyond Jackie’s expectations. “He once said that he doesn’t want to come out, because he believes that he needs to hold responsibility for his actions. I only told him two things – that I’m fine, and his mother is fine. I don’t want him to worry, and I want him to safely accept his punishment.”

Will Not Meddle in Son’s Future

Jackie hopes Jaycee will take control over his new life and become an anti-drug ambassador, setting a good example for young people who are also going through similar drug struggles.

“I don’t want to meddle in his future and will not help him arrange anything. After this incident, I will spend more time with him and let him know how much I care about him. If the opportunity comes up, I want to work on a movie with him. Will Smith halted his work half a year for his son, why can’t I?

“I won’t yell at him. I’ll leave that job to Joan. Now, I will praise him. I will slowly change. He is 32 years old now, and it’s time for him to take care of himself. I also hope that he will take care of me.”

After Jaycee was released from prison, Jackie has not spoken to him on the phone yet. “I want to meet with my son in person. I still don’t know what I should say to him when we meet!”

It was speculated that Jackie had used his connections in China and pulled some strings to save his son from a longer sentence, but Jackie said, “Of course not! If I do that, I’ll be over! He’ll be over! If he was arrested today and released tomorrow, how would the world see me? He should be sitting in there longer than others, with his punishment more harsh than others!”

25 comments to Jackie Chan on Son’s Release from Prison: “I’ll Spend More Time With Him”