Jackie Chan Won’t Give a Cent to Help Elaine Ng 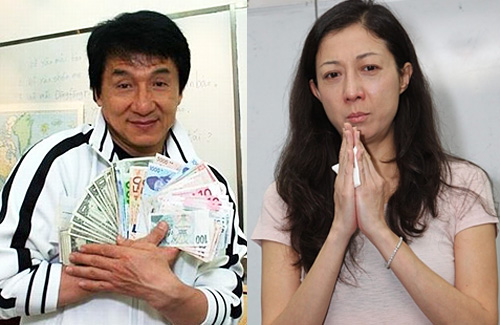 Elaine Ng (吳綺莉) conceived her daughter, Etta Ng (吳卓林), in 1999 after having an affair with Jackie Chan (成龍). Married to Joan Lin (林鳳嬌), Jackie initially denied that he had impregnated Elaine until she demanded for a DNA test. After Etta was born, Jackie remained an absentee father and was not involved in Etta’s life. As Elaine fell into financial troubles in recent years, Jackie’s coldhearted attitude towards his ex-lover and own daughter has been criticized.

The frequent tabloid reports made it hard for Jackie to ignore Elaine and Etta’s struggles. Jackie admitted that he had caused Etta pain, “Yes, I have hurt her,” but did not reach out to help her even when she had suicidal tendencies. He said casually,“If I see her, I’ll see her. I’ll do whatever!”

Initially, Jackie said that when he dies, he will leave all his money to charity. In 2015, Jackie changed his mind and set up a new will to give all his assets to his son, Jaycee Chan (房祖名), who was released from prison that year. Possessing a net worth of over 9.8 billion RMB, Jackie said Etta would not be included in his will. He said, “I don’t think she needs my money!”

In 2017, Elaine hit rock bottom when 17-year-old Etta ran away from home. Losing her radio hosting job, Elaine reached out to Jackie through a middleman for help. Jackie’s response was, “I won’t give a cent to help you!”

Although Jaycee is Etta’s half-brother, he rarely spoke about her over the years. He was concerned that his mother would be unhappy. Recent rumors circulated that Jaycee gave Elaine money to help pay for Etta’s international school tuition fees and living expenses, but Elaine denied that she received assistance.

To get through financial difficulties last year, Elaine had to rely on help from a Buddhist charity and borrowed money from her friends.