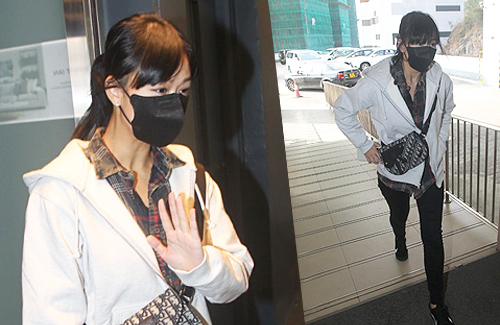 Jacqueline Wong‘s (黃心穎) image was tarnished beyond repair when she was caught cheating on Kenneth Ma (馬國明) with Andy Hui (許志安) last April. Jacqueline promptly fled to the United States for eight months to avoid the paparazzi, but her recent return to Hong Kong is speculated to be a last attempt to revive her career. Since her drama Handmaidens United <丫鬟大聯盟> was airing, she wanted to test the waters to see if the public would accept her again.

The actress returned on December 14 and cried out an apology, admitting her wrongdoings. First time seeing the public after the scandal broke loose, Jacqueline evidently gained weight and her face was considerably rounder than before.

However, despite being back for 35 days now, the 30-year-old actress has yet to appear at any events and chose to stay home the entire time. While refusing to leave her apartment, her meals were hand delivered to her three times a day by her elder sister, Scarlett Wong (黃心美).

With her 31st birthday coming up on January 23, Jacqueline finally stepped outside her home. Wearing a black face mask, she appeared to be much thinner and very tired. She quietly left her building and got into a minivan. When the media caught up to her to ask her about ex-boyfriend Kenneth’s TV King win, Jacqueline refused to answer and quickly left.

The actress arrived at a home department store and quietly shopped for a bit before heading off to pick up some dog food. While leaving, Jacqueline saw the reporters again and waved a quick hello before heading back up to her apartment. Before going up though, she disclosed that she will be visiting family for the upcoming Lunar New Year.