Jacqueline Wong Wants to Move On from Cheating Scandal 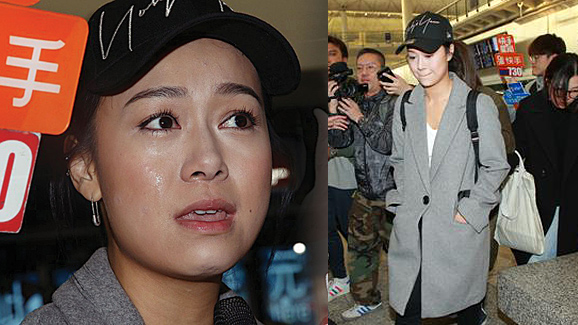 The actress wants to “move on” and has “yet to think about” her future career plans.

On December 14, Jacqueline Wong (黄心颖) appeared at the Hong Kong airport in a gray coat and black cap. It has been eight months since Jacqueline disappeared from the public eye after her cheating scandal. In April this year, singer Andy Hui (許志安) was caught cheating on his wife Sammi Cheng (鄭秀文) when he was secretly filmed kissing and fondling Jacqueline inside a taxi.

Living in Los Angeles over the past few months to avoid public outcry, Jacqueline was spotted at the Hong Kong airport yesterday. She was awaited by over ten media outlets at the airport. Jacqueline’s sister, Scarlett Wong (黄心美), who is also a TVB actress had requested her manager to pick Jacqueline up at the airport.

Already in tears during her interview, Jacqueline said, “I should move on, and look forward, whether it is what I feel like saying or want to say, I have done so both publicly and in private. I will not respond to this matter again. This time I am back to be with my family.”

When asked about her career plans in the future, Jacqueline emphasized that she is back this time to meet her family. When questioned again if she will remain in the entertainment circle or change careers, she replied that she has not thought about it, and will have time in the future to contemplate the matter.

As for whether she has contacted Andy, she answered that she will not respond, and clarified that she has not changed her name, nor has she switched jobs, and has yet to think about her career.