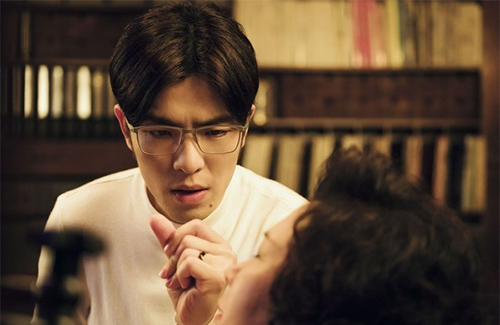 In an interview to promote his new miniseries Green Door <魂囚西門>, Jam Hsiao (蕭敬騰) revealed to the press that he’s always had a pair of “yin yang eyes,” a clairvoyant ability to see supernatural events.

He’s gotten so used to them that he’s not even fazed.

Due to the nature of his job, the Golden Melody Award-winning singer-actor has to travel frequently, and would always spend long nights in hotels. In one experience, he kept hearing strange, inexplicable noises in his hotel room. He had to sing “Good Brother” <好兄弟> to put himself to sleep every night.

In another incident, he claimed that he once saw a blood-red color seep through the walls, but others didn’t. He also experienced a time when water leaked into his room from a broken washer, but that water turned out to be blood.

His manager revealed that he once witnessed Jam trying to build a blockade of random things at his Vegas hotel door so it wouldn’t open. His manager guessed that Jam probably had another supernatural sighting. Jam usually does not share his supernatural encounters with others, as he doesn’t want to scare people, nor make other people think he’s crazy.

But despite these experiences, Jam said he still doesn’t quite believe in the supernatural. He expressed that a lot of what he saw may be due to psychological stress, and they could as well be hallucinations.

“In the end, believe what you want to believe,” said Jam.

Green Door, directed by Lingo Hsieh (謝庭菡), is a psychological thriller that stars Jam as a clinical psychologist who has a ghost as his client. It also stars Bea Hayden (郭碧婷), Enno Cheng (鄭宜農), and Hsieh Ying-hsuan (謝盈萱).