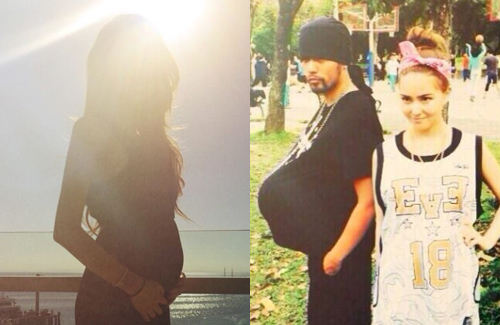 Pregnancy speculations for 21-year-old Hannah have been circulating since as early as January, when the couple held their wedding in the beautiful town of Selby, New Yorkshire in England.  The had couple denied the rumors at the time, but Jay happily admitted that he wants to have at least five children so they could form a band.

It turns out that the speculations are true after all. On April 3, Jay shared two photos on his official Facebook account, writing, “Let us compare who is better at [basketball] traveling.” The first photo Jay shared was of the couple posing side-by-side in sports outfit, and Jay had a basketball stuffed underneath his shirt. The second photo was a silhouette of Hannah, showing a protruding belly.

Within fifteen minutes, Jay’s post was liked by over 30,000 likes. It eventually went over 300,000 likes and 8,600 shares. Many netizens left behind positive comments, blessing the couple and wishing them happiness.

Jay’s record label later confirmed Hannah’s pregnancy. His agency also shared that the couple have just returned to Taiwan from their Honeymoon in Thailand. Jay did not reveal how many months Hannah is along, but judging from the size seen in Hannah’s photo, she should be at least three months pregnant.