Jimmy Lin Leaves the Hospital With Wife and Twins 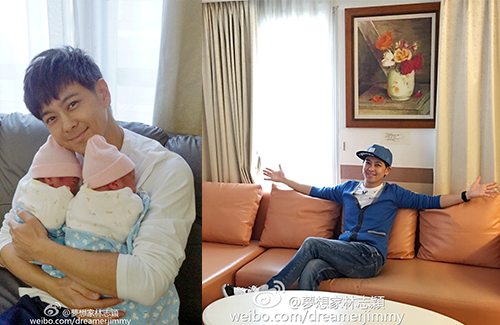 On December 5, former pop idol Jimmy Lin (林志穎) announced on his Weibo that his wife, Kelly Chen (陳若儀), has given birth to fraternal twin boys named Jenson and Kyson. Kelly delivered via Cesarean section in a Taipei hospital. Jimmy and Kelly also has one older son, Kimi.

After giving birth to the twins, Kelly remained hospitalized for the next five days to recover from her surgery. Jimmy stayed by Kelly’s side throughout the duration of her hospital stay, also helping her take care of the twins.

On December 10, Jimmy announced that they were finally discharged from the hospital. He took a picture with his “hospital bed” and shared it online. “After working all day, we can finally leave the hospital. Saying goodbye to my warm sofa bed,” said Jimmy.

Kelly and the twins will be transferred to a postpartum home care center, where they will stay for a month or more. Asking if Jimmy will rent out the entire center like what Jay Chou (周杰倫) did for Hannah Quinlivan (昆凌), Jimmy said, “I’m not that rich!”

In related news, Jimmy’s eldest son Kimi turned 6 years old in September. Kimi, who starred in Dad Where Are We Going? <爸爸去哪兒> with Jimmy, is currently preparing for his first year of primary school, and will not be making any more public appearance.