Kate Tsui Blasts: “Vote for Me for TV Queen!” 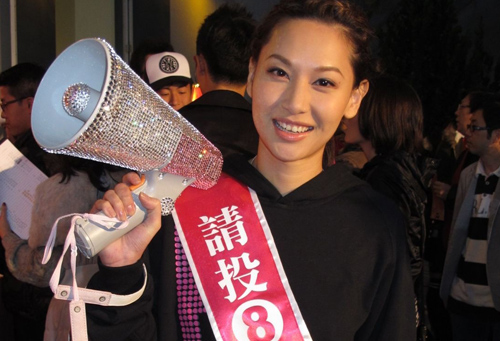 TVB organized a two-day, million dollar feast and invited 3,800 artists and company employees to attend. TVB’s gesture is meant to show off the stations’ strength and resources in the face of growing competition. At the feast, Kate Tsui (徐子珊) showed her support for TVB and opposed the issuance of new broadcasting licenses, while urging people to not forget to vote her for TV Queen.

TVB has been strengthening its tactics to oppose the Hong Kong government’s approval of new free TV broadcasting licenses. Concerned that its monopoly will be threatened if rival stations such as City Telecom (CTI) receive the license to operate, TVB executives stand united in making their strong opposition heard. However, several artists, including Fala Chen (陳法拉), said they supported the approval of new licenses. TVB  sent a text message as a “warm reminder” to all its internal staff, hoping that a more unified stance can be coordinated.

At the feast, Kate Tsui openly stated that she is against the approval of new TV broadcasting licenses. “The Hong Kong market is not very big. Too many television stations will result in a terrible fight,” Kate added that TVB’s reduced advertising revenue will also lower artists’ incomes.

Kate acted as a politician yesterday, wearing a sash with her name printed on it and urged everyone to vote for her as TV Queen in the 45th TVB Anniversary Awards. She blasted into the loudspeaker, “Please cast your vote for candidate #8 Kate Tsui!”

Kate spoke of her own antics, “It doesn’t matter if it’s dumb as long as I’m able to draw votes. I’m afraid that everyone will forget to vote. I also asked overseas friends to vote. If you don’t know how to vote, you can give your ID number to me,” Kate joked and said she will even approach TVB Chairman, Norman Leung (梁乃鵬),  to ask for his vote.

90 comments to Kate Tsui Blasts: “Vote for Me for TV Queen!”