30-year-old actress Kelly Cheung (張曦雯) made her acting debut in 2016, playing a supporting role in Law dis-Order <律政強人>. But the actress actually made her industry debut four years earlier, through the 2012 Miss Chinese International Pageant. Kelly had won first place.

Returning to the small screen again in 2018, Kelly quickly jumped from playing supporting roles to leading roles, finally starring alongside Him Law (羅子溢) in The Witness <木棘証人> and now, Vincent Wong (王浩信) in the TVB anniversary drama Legal Mavericks 2020 <踩過界Ⅱ>. While it may seem like Kelly’s rise to fame took only two years, it was actually eight years in the making.

“I didn’t get to film dramas in the first few years of debut,” said Kelly. “Now that I’m acting, I know many people would feel like I’m rising fast, but I’ve actually been working quietly for many years. Right now, I’m really cherishing all the opportunities that are given to me.” 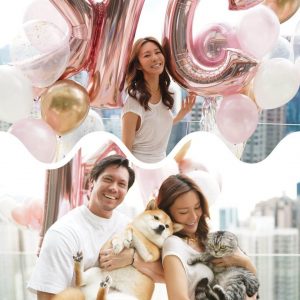 Kelly and her current boyfriend, Mark Brunyez of American and Japanese descent, have been dating for two years. The couple met in the United States, Kelly’s home country, prior to her entry into the Miss Chinese International Pageant. They had stayed in touch as friends for many years, before deciding to take their relationship to the next step two years ago.

Formerly the vice president of an American international investment firm, Mark is now living in Hong Kong with Kelly, and has started his own business. The couple recently adopted a dog and a cat.

Kelly doesn’t regret going public with Mark. She said, “I’m actually less stressed now that everyone knows I’m in a relationship. We’re just a normal couple with a normal dating life. Nothing to hide. He is part of my life. I believe more people are now open to artistes dating. That way, they also get to know more about my private life. I don’t mind it at all.”

Speaking about Mark, Kelly described her boyfriend as “the perfect man.” Mark is friendly, kind, and always willing to lend a helping hand to a friend. “He’s a very genuine person. He would always be there to listen. Sometimes I rant to him when I’m unhappy. He would always try to see things in a more positive perspective.”

Although already living together, the couple do not plan on getting married anytime soon. “I’m a workaholic,” said Kelly. “I’m always itching to do something. Even when I’m home I think about work. He understands my situation, and he knows that this is an important time for my career development. Even if I don’t work hard now, it may be too late.”

The Witness may be Kelly’s first television drama as female lead, but she didn’t start to feel the pressure of leading the series until after collaborating with Vincent Wong and Paul Chun (秦沛) for Legal Mavericks 2020.

“They’re both very different dramas,” said Kelly. “Chris [Kelly’s character in The Witness] is cute and baggy, while Eva [Legal Mavericks 2020] is aggressive and even manipulative. I hope everyone will notice my different portrayals of the two characters.” 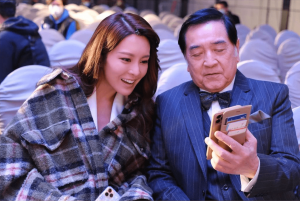 Eva is the most challenging role in Kelly’s career thus far. She explained, “I usually portray characters who are positive and happy; generally very likable characters. However, Eva is a very morally gray character. Very competitive and ruthless. She can come off as unlikable, because she’s always going against Hope Man. Not only is she a challenging character to play, having to play a new role in an already popular series is very stressful. I don’t know if people would like her or not.”

“I was so stressed out when I first met Paul Gor,” said Kelly. “He looks very serious and intimidating, so I was a little bit scared. After all, I have very little acting experience. But I could definitely tell that Paul really loves his kids. He won’t say out loud, but he’ll show it in action.”

Kelly shared that Paul is also very observant and detailed. He noticed that Kelly enjoys all things sweet, and one day brought a box of chocolates especially for Kelly. Paul would also notice days when Kelly would get more stressed than usual; he would sit beside her and draw or write poems to cheer Kelly up. “He’s also a great resource and loves to share his knowledge with me. I’m very thankful for him. Lesley Chiang (姜麗文) is so lucky to have such a great father. It makes me really miss my father back in the United States.”