Kenneth Ma and Roxanne Tong Meet Up Despite Busy Schedule 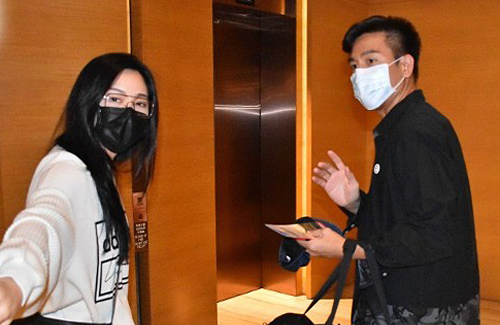 Receiving endless congratulatory messages from friends and fans after announcing their relationship on social media for the past two weeks, Kenneth Ma (馬國明) no longer had to hide from the cameras and was seen casually visiting girlfriend, Roxanne Tong (湯洛雯), during his filming break.

Despite being extremely busily wrapping up Plan B <BB大曬> and getting ready for upcoming drama Children’s Hospital <兒童醫院> in July, Kenneth makes use of every bit of time he has to see Roxanne. While he was on a short break in between filming, Kenneth was seen picking up Roxanne and driving back to her apartment. Smiling at the reporters, Kenneth said they just went out to buy a couple of things and he will have to head back to TVB Studios for work later.

Leaving after spending three hours at Roxanne’s place, Kenneth quickly waved at the paparazzi before heading off to work. He expressed, “I don’t really have anything else to say–thanks for all the concern.” Asked if he will be spending more time with Roxanne when he finishes filming his current drama, Kenneth replied, “I still have another drama to film on afterwards.”