Kenneth Ma Does Not Need a Vacation to Mend his Emotions 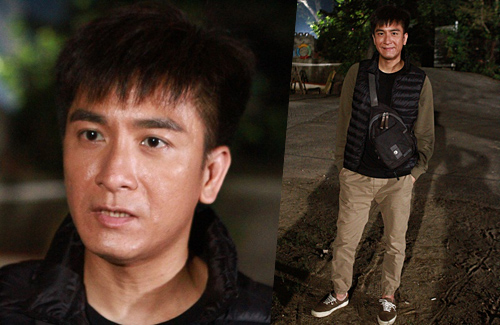 Jacqueline Wong (黃心穎) and Andy Hui’s (許志安) cheating scandal rocked the entire entertainment industry when it was exposed in April. While Andy’s wife, Sammi Cheng (鄭秀文), chose to forgive her husband and continue focusing on her concert preparations, Jacqueline’s boyfriend Kenneth Ma (馬國明) stepped forward to protect Jacqueline and urged the public to put a stop to the rumor mill. Netizens were surprised by Kenneth’s calm demeanor and praised his chivalry.

While on set filming for The Exorcist’s Meter 2.0 <降魔的2.0>, Kenneth appeared to be in good spirits and does not seem to be too affected by Jacqueline’s betrayal. On whether he will be taking a break after filming to recuperate his emotions, Kenneth responded with his typical practicality, “When I take a break, I need to do personal errands, like updating my car license or dealing with the bank. Plus, I would try to earn more money on the side!”

When reporters prompted that Jacqueline’s unfaithfulness must have hurt him immensely, Kenneth shrugged and said, “There’s no need [to mend my emotions or anything]. What’s there to mend? It is not as serious as you guys make it out to be! It’s really nothing. I’m working through it with a relaxed mindset. I’m not the type of person to come out and seek sympathy.”

Kenneth is known to have a close relationship with his mother; has the scandal affected her at all? Kenneth said, “Not really. She’s really happy. She went to go play mahjong today and still isn’t done yet.” However, Kenneth refused to make any further comments directly about Jacqueline and the current status of their relationship.

Also on set for filming was Gloria Tang (鄧佩儀), who has an action role in the drama. Action roles often require many difficult stunts and movements, resulting in bruises and injuries. However, the 2013 Miss Chinese International Pageant winner remains unfazed by these difficulties. “I did my homework and made adequate preparations. I make sure to stretch beforehand every time. Previously, I was filming a scene that required wiring and pulled a muscle. Now, I have more experience and know how not to injure myself. I enjoy being active. I run every day for half an hour to an hour. I love Muay Thai too. I hope TVB will continue to give me more opportunities to try out different characters.”