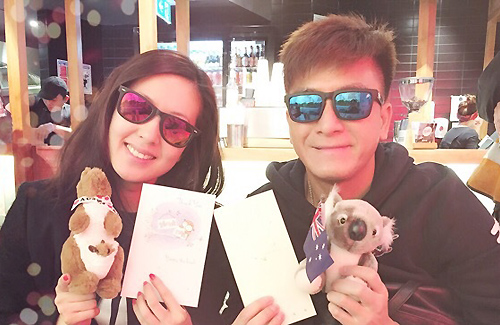 Although Kenneth Ma (馬國明) often claims to be single, he has been behaving like a couple with Natalie Tong (唐詩詠). The pair reportedly cozied up together while traveling to Australia, even sidelining Natalie’s new boyfriend, Tony Hung (洪永城).

Kenneth and Natalie became close after starring in 2010’s A Fistful of Stances <鐵馬尋橋> as brother and sister. The two even started referring to themselves as “siblings” offscreen. Their respective breakups at the time- Kenneth with Nancy Wu (胡定欣) and Natalie with Amigo Choi (崔建邦) – only brought them closer, as they supported each other through the emotionally draining period. Over the years, Kenneth and Natalie have been captured in numerous photographs exhibiting their closeness, such as appearing at events hand-in-hand, taking selfies together, and even peeling prawns for each other. Naturally, many wondered if Kenneth and Natalie had romantic feelings for each other, but the rumors eventually faded when Natalie started dating Tony this year.

Tony may, however, have reason to worry over the recent photographs showing Natalie and Kenneth on a three-day work trip to Australia. Only accompanied by their assistants, Natalie and Kenneth wore matching outfits, placing their heads close to each other in multiple selfies, and generally having very close interaction with each other. There was even a photograph of Kenneth cutting up Natalie’s food for her while she gazed at him with a smile. The two appeared to be behaving just like a couple in love.

An anonymous source close to Kenneth and Natalie said, “They are really close, and Kenneth has never been so sweet to any womanl other than Natalie. During this trip in Australia, TVB once called Kenneth quite late in the night, and Natalie happened to be in his hotel room!”

Perhaps due to his protective tendencies, Kenneth was reportedly also extremely concerned when Natalie first started dating Tony. According to some reports, Kenneth had grilled Natalie quite intensively about Tony.

When approached for comment, Tony insisted that he was “not jealous” and was “totally cool” with the situation involving Natalie and Kenneth. On whether Natalie had asked him to peel prawns for her, he laughed and said, “Well I’m actually allergic to seafood, so she has no opportunity to ask me to peel prawns for her.”

As for whether he had regularly called Natalie when she was in Australia to check on her, he expressed, “No I didn’t. I was quite busy myself. And it’s good that she had the opportunity to go abroad and have a good time.” Finally, Tony emphasized that Kenneth and Natalie are only brother and sister.

Other reports claimed that Natalie may just be a red herring as Kenneth’s true love interest is Jacqueline Wong (黃心穎), whom he met while filming Inspector Gourmet <為食神探> together. The pair generated intense chemistry while filming a bed scene in the drama.

On his rumors with both actresses, Kenneth laughed and said, “I had prepared myself for questions about Natalie but all of a sudden I’m getting questions about Jacqueline. Who knows which other female celebrity I will be asked about next? I will just treat this as free publicity!”

Kenneth added that he did not feel awkward when he ran into Tony, and he did not need to explain anything as neither of them took the reports seriously.

On rumors that Jacqueline had given him a watch as gift, Kenneth joked, “Don’t give me a watch next time. Give me a house or a car!”

3 comments to Kenneth Ma, Natalie Tong Behave Like a Couple