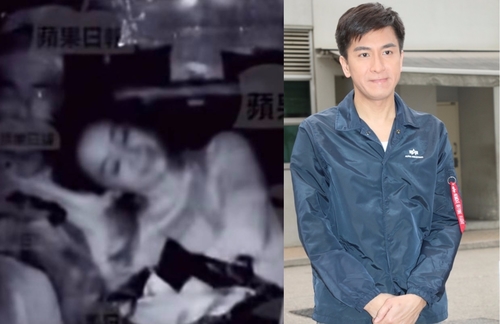 On April 17th, Kenneth Ma (馬國明) finally broke his silence regarding girlfriend Jacqueline Wong (黃心穎) and Andy Hui‘s (許志安) cheating scandal. The 45-year-old actor accepted an interview at TVB City, where he showed up to film upcoming drama The Exorcist’s Meter 2 <降魔的2.0>. Kenneth appeared wan and sallow, but he was prepared to address the matter in the face of many reporters.

With a calm front, Kenneth said, “Actually, after I learned about this matter, my anger quickly turned into worry. I was worried about all the people involved in this incident. I do not hope for anyone to get hurt. I can only speak for [Jacqueline]… she knows she’s in the wrong and she really wants to come out and speak to everyone. But the company is afraid she’s emotionally unstable and will say the wrong thing, so they did not arrange for her to come out. I know she just posted a message on Instagram.”

He continued by defending the 30-year-old actress, “I can only say she’s still very young, and still has a lot to face in the future – a long road to walk. I hope everyone will give her space. As for me, there’s no need to worry about me – I will continue to concentrate on my work and will keep filming. I don’t hope to impact the filming schedule. Andy has already spoken, so I will not comment on the situation because I think the only person qualified to do so is Andy’s wife, Sammi Cheng (鄭秀文). I hope things will settle down as soon as possible.”

Kenneth also asked the media not to interview his parents, as they are not in the entertainment business. Asking reporters not to focus on his mother’s interview, he hinted that the reporters scared his mother, which led her to possibly saying the wrong things. The filial son plead, “I hope everyone will give us a break and not scare my family. I can only say this much. I will concentrate on my work in the coming days, thank you for your concern and please don’t agitate the situation.”

When the interview came to an end, a reporter asked the star what kind of relationship he currently has with Jacqueline and whether or not he broke up with her. Kenneth replied, “I have nothing else to add.”