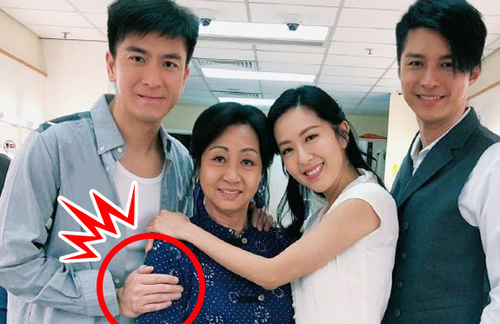 About a month has passed since Andy Hui (許志安) and Jacqueline Wong‘s (黃心穎) cheating scandal made headlines and the main parties involved have each expressed their views on the incident and chose to move on with their lives. Kenneth Ma (馬國明), especially, is making strides. Earlier, he took a group photo with fellow actors, and netizens discovered he is no longer wearing the matching couple ring he bought last year with Jacqueline as a sign of commitment. Therefore, it is speculated the 45-year-old actor broke up with Jacqueline following the incident.

However, sharp-eyed reporters already noticed his bare finger even when he was still filming for The Exorcist’s Meter 2 <降魔的2.0>, and he only had on his usual silver bracelet. On top of that, Kenneth did not respond to questions about his current relationship with Jacqueline and he did not disclose whether they were in contact after she flew to America.

Fans are worried about his wellbeing, considering he has not updated his social media much. Even when he did, he just said that he would continue to work hard. However, his most recent post on Weibo sparked discussion. He wrote, “Hope… tomorrow.”

It is unknown if his message hints that his relationship with Jacqueline is over and he is looking forward to a new beginning.