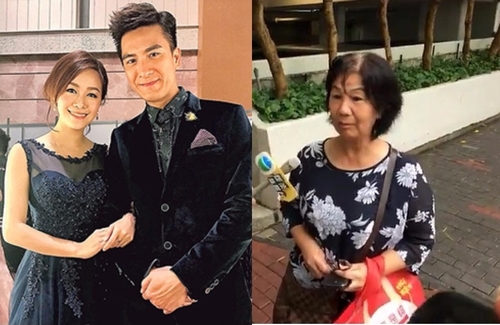 Kenneth Ma (馬國明) has yet to respond to Jacqueline Wong‘s (黃心穎) cheating scandal with the married Andy Hui (許志安). Dating for over two years, the pair’s relationship is a well-known secret in the entertainment industry and they’ve also met each other’s families already. Thus, it came as a big surprise when the actress was caught cuddling and kissing Andy in a taxi. While hot commodity Kenneth chose to stay silent during this time, his mom accepted an interview from reporters waiting outside her residence.

The stunned mother frankly shared she was unaware about the incident and expressed the last time she saw Jacqueline was during Chinese New Year. In fact, she’s only seen the actress several times in the past when Kenneth brought her over for dinner on his days off. She added that her impression of Jacqueline was ordinary – she neither liked nor disliked the 30-year-old. When asked if the couple is in a stable relationship, she expressed she’s not one to inquire about the two’s relationship.

“Let’s say this – I don’t meddle in the kids’ business. If they’re suitable for each other and want to get married, they can tell me but they have not mentioned it,” Kenneth’s mom said.

As to whether or not she’s disappointed in her potential future daughter-in-law, she said, “I think I will let them deal with it themselves because I typically don’t get involved in this kind of stuff.”

She also revealed Kenneth is at home. “He’s fine. He’s watching a game and said he has to go to work later. I don’t know [if I should be worried] since I haven’t confirmed it,” the actor’s mom said.