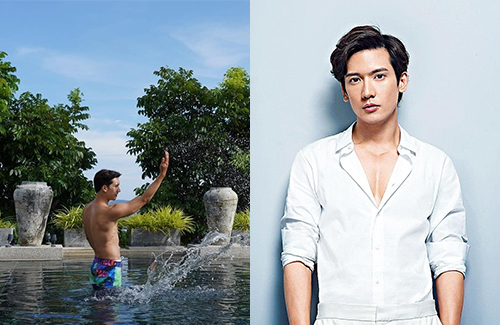 Hong Kong pop duo BOYZ were originally slated to hold their first Hong Kong Coliseum concert this September, but due to member Steven Cheung’s (張致恆) cheating scandal, the concert got temporarily shelved. The person most affected by this scandal is, of course, Steven’s bandmate Kenny Kwan (關智斌), who was notified of the suspension while he was filming a video for the concert in Phuket, Thailand.

Kenny had dreamed for years of headlining a show at the HK Coliseum. Fans and non-fans alike all felt terrible for the 38-year-old singer, who was so close to fulfilling his dream.

Fortunately, Kenny’s luck is turning around!

In a statement by EEG released on Friday, the agency announced that the concert will continue to be held on September 14th as planned, and it will be completely headlined by Kenny himself.

“To all media friends,” began the statement. “We’re so excited to announce this news! The company has already gotten confirmation from the Coliseum, that Kenny Kwan will step onto the Coliseum stage in September, fulfilling his dream. He has the full support from his EEG label mates Joey Yung (容祖兒), Leo Ku (古巨基), Hins Cheung (張敬軒), and TWINS. Because we just received the confirmation, many things are still a work in progress. More details will be announced in the future. Thank you once again your support to Kenny!”

Kenny is beyond excited about the announcement. He told Oriental Daily: “I am so happy. So happy! I’m so thankful to everyone’s support, especially to our friends in the media, my brothers and sisters at the company, and even the netizens. I’ve received so much support from them in the past week. I also want to thank all my artist friends and fans for sending me supportive messages. Because of your support, I get to fulfill this dream of mine. I genuinely thought it won’t happen, so I am so grateful. I want to use this time to focus entirely on this concert so I will not let everyone down. I will dedicate 100 percent to make a good show for everyone, to tell everyone that I deserve to be on that stage. Thank you all.”

He updated his social media with a new photo and a message of thanks to his fans, writing, “I, Kenny Kwan, will soon hold his first HK Coliseum concert! I’ve never felt so excited to the point where my brain is fried. I cannot find words to describe how I feel. I… really don’t know what to say, but I have to thank all the netizens who helped me rally! This isn’t only about me, but also about you guys. This won’t happen without a single one of you!”