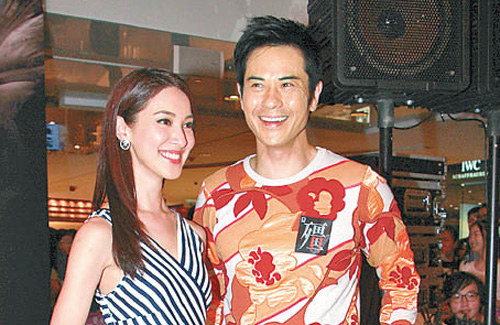 Tabloids reported that 48-year-old Kevin Cheng (鄭嘉穎) and 27-year-old Grace Chan (陳凱琳) plan to get married in August since Grace is three months pregnant. Due to the early stages of the pregnancy, Grace allegedly slowed down her work to prepare for the flash wedding.

Exasperated by the rumors, Grace denied that she is expecting. “I’m not pregnant. I don’t know why the news reports say so. Maybe it’s to create a more sensational topic.” Asked if she and Kevin plan to get married in Bali, Grace said, “Sorry, Kevin and I don’t have anything to announce right now. I hope everyone understands.”

Dating for three years, the couple definitely saw each other as future marriage partners. Kevin admitted that the couple has marriage plans, but was discrete about when their wedding would be. He said, “Thanks everyone for your concern. Our relationship has led to many speculations and reports in the last few days. Right now, we do have plans to get married. But the pregnancy claims are false! As to the wedding date, we understand everyone is even more eager than us. But please give us some space. When we get married, we’ll announce it.”

Currently filming in China and busy through August, Kevin said he will be busy flying between Beijing and Hong Kong in the upcoming weeks.