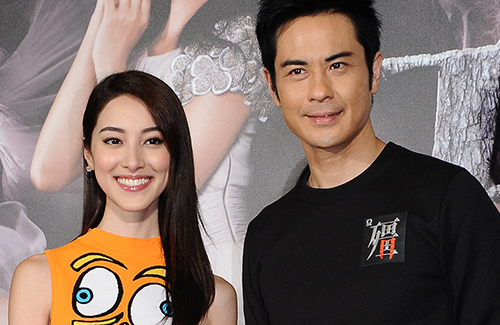 The gossip mills will never stop turning, and this time, the topic lies on the popular couple, Kevin Cheng (鄭嘉穎) and Grace Chan (陳凱琳).

Ever since her first venture into acting after winning 2013’s Miss Hong Kong, 25-year-old Grace Chan has been the bane of acting critics. After receiving terrible remarks about her poor acting in last year’s Captain of Destiny <張保仔>, Grace was hit with even more negative reviews for Brother’s Keeper 2 <巨輪II>, which will air its series finale tonight.

Fortunately for Grace, boyfriend Kevin Cheng (鄭嘉穎), who is 22 years her senior, has been around to give her emotional support. Grace has thanked Kevin multiple times in the past for supporting her.

But Kevin’s emotional support turned into something much more physical. According to a recent gossip report, Kevin had blown up at a director while filming a night scene for the TVB drama, Lost <迷>. He had cursed and slammed tables, allegedly yelling, “I’m not doing this anymore!” before leaving the film set without a second glance.

The report claimed that Kevin’s anger was stemmed from Grace’s questionable storyline in Brother’s Keeper 2. On the show, Grace gets sexually harassed and almost raped by her adoptive father, portrayed by Hugo Ng (吳岱融). Kevin was reportedly very upset that Grace had to film such tasteless, “incestuous” scenes.

It was also said that Kevin didn’t like the idea of Grace going skinny dipping with Edwin Siu (蕭正楠) for the show and had complained about it to Brother’s Keeper 2 producer Amy Wong (王心慰), who also produces Lost.

Kevin has yet to make comments about these claims.