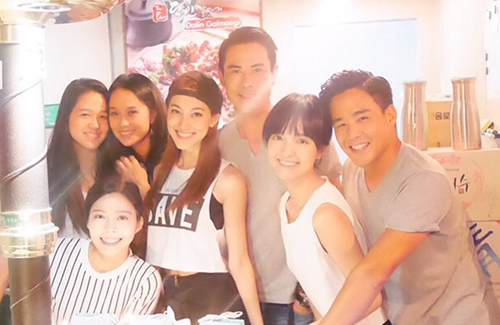 Are Kevin Cheng (鄭嘉穎) and Grace Chan (陳凱琳) now official? The Blue Veins <殭> costars have been catching the media’s attention recently with their ambiguous romance. Ever since collaborating on the set of the vampire drama, 45-year-old Grace and 24-year-old Grace have been spotted together on numerous occasions. They confessed to the press that they have good feelings toward each other, but refused to elaborate if they were dating for sure.

In a recent television program, Kevin described his status with Grace as “work-in-progress”. He did not introduce Grace as his girlfriend, but he did admit that they have been seeing each other, and asked the press to give them more space for development.

On June 23, Kevin and Grace’s Blue Veins costar Anjaylia Chan (陳嘉寶) uploaded a photo taken at Grace’s birthday party on her Weibo, congratulating Grace on her 24th birthday. On the picture, Grace is posing with six of her friends including Kevin, who was standing right next to her like a boyfriend. Also in the picture is Anjaylia’s boyfriend Epaphras and Blue Veins costar Winki Lai (賴慰玲).

Is it possible that Kevin and Grace are confirming their relationship with the help of Anjaylia?