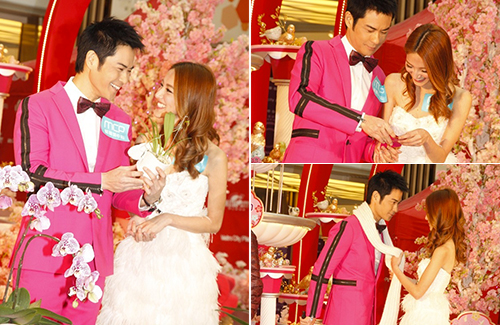 Kevin Cheng (鄭嘉穎) and Grace Chan (陳凱琳) appeared at a shopping mall in Po Lam yesterday for a Lunar New Year event. This is Kevin and Grace’s first public appearance together after confirming their relationship back in July. The adorable couple appeared in matching pinks and whites at the function.

Though they appeared rather shy and stiff at first, Kevin and Grace exchanged loving looks while playing games with each other on stage. However, when the MC asked them to kiss each other, Kevin said, “Let us prepare backstage first!” and avoided the MC’s request altogether.

Like a newlywed couple, Kevin and Grace fed each other candy and played party games. They also had a red string wrapped around their hands, symbolizing unity. Remarked that they were played around like a wedding couple, Kevin said, “It was an interesting experience!” Grace added, “Yes, very happy. Very sweet.” She looked at Kevin and smiled.

Asking if they plan to make more appearances together like this one, Kevin said, “Well, I don’t think it’s necessary. Wouldn’t it be more special if we make appearances like this only once in a while?”

Commenting about how sweet Kevin and Grace looked, the reporters said Kevin should have kissed Grace like what the MC asked. Kevin turned red and stuttered, “This isn’t that! Just because we attended an event together doesn’t mean we have to kiss! It depends on the occasion! If this was a wedding then yes, there should be kissing. But this is a New Year’s event in a shopping mall. Wouldn’t kissing be a bit strange?”

Rumors say that Kevin and Grace earned $800,000 HKD for their appearance that day. Kevin turned to Grace and joked, “Then that means they still owe us money.” He then clarified, “We are pleased with what we got, but that is an exaggerated number. I don’t want people to think we’re too expensive!”

Former Taiwanese actor and filmmaker, Jimmy Wong (王羽), was hospitalized for acute cerebral hemorrhage this week. Jimmy Wong is the father of singer Linda Wong (王馨平), Kevin’s former girlfriend. Asking if Kevin has heard about the news, he said, “I found out about this last night. I’m very sure Linda is very busy right now. I’ve sent her a message already. Earlier, I asked Linda for help with something, and we were in frequent contact last week. I had no idea her father was ill. I’ve already inconvenienced her too much. I hope all will be well.”