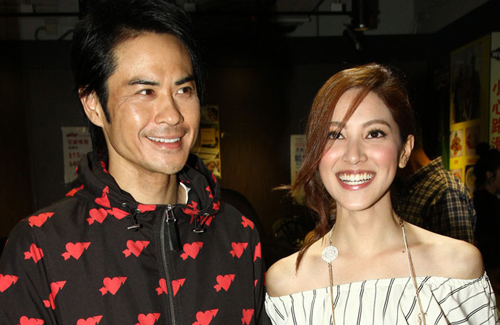 Since working together on their first collaboration Blue Veins <殭>, Kevin Cheng (鄭嘉穎) and Grace Chan (陳凱琳) became mutually attracted to each other. Although Grace said they “are not officially dating yet,” Kevin plans to ask her out on dinner dates.

At a Blue Veins celebration event last night, Kevin was asked if he felt unhappy that filming for the drama has ended, which meant that he will no longer see Grace at work. Kevin smiled and said, “Although we have finished filming, we’re still friends. Since my contract with TVB isn’t over yet, there are still chances for us to work together.”

Although Kevin will start filming in Mainland China in June, he plans to stay in touch with Grace and Anjaylia Chan (陳嘉寶). Probed further about development with Grace, Kevin said,”Give us some space. If you see us going out to dinner, it’s normal activity. Please don’t be shocked.”

At 2 a.m., Kevin had not left the party yet, but asked his assistant to drive Grace home. Hoping to avoid the paparazzi’s attention, Grace left through the back door. When reporters asked Grace why Kevin did not personally drive her home, Grace did not respond and turned away.

Within three months of filming Blue Veins, Grace and Kevin’s relationship progressed quickly. After Grace was spotted entering Kevin’s home “to borrow DVDs”, a private text message conversation between the couple was exposed. In the exchange, Kevin allegedly called Grace “Honey”, while she expressed concern over his long filming hours. The pair later said they had no recollection of the conversation.

In response to their relationship, Kevin hoped it would progress further. In an earlier interview, he remarked, “Everything starts with being friends. With regards to room for development, I can’t flat out deny the possibility.”

Despite their 22-year difference, Grace had shrugged, “Age gaps are not a problem.”