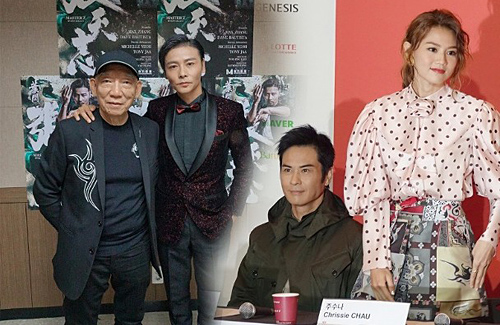 Master Z: Ip Man Legacy  <葉問外傳：張天志> is the first kungfu action film ever to be selected as the closing film at the Busan International Film Festival (BIFF). Cast members including Max Zhang (張晉), Kevin Cheng (鄭嘉穎), and Chrissie Chau (周秀娜) also shared unforgettable encounters on set. While the entire cast was excited to work with martial arts chereographer and film director Yuen Woo Ping (袁和平), not everything went as they had expected.

Actor Patrick Tam (譚耀文), who played the main protagonist, was disappointed that he did not get to do ass-kicking kungfu in the film.

Max, reprising his role as Cheung Tin Chi in Ip Man 3, was forced to conquer his acrophobia in order to shoot fighting scenes atop the distinctive street signs of old Hong Kong. “I have a fear of heights. To sightsee at the height of the signs is still manageable, but to fight and complete action sequences was a real challenge!” Due to complexity of the proposed choreography, the team spent two full weeks perfecting trials before actual filming. Thankfully, Max said that the experienced choreographer had considered most factors and potential issues of fighting at such heights, and had designed the stunts flawlessly for the cast.

For Kevin and Chrissie, an exceptionally challenging scene awaited them on the very first day of filming.“I was overjoyed at finally having the chance to be part of a famous action sequence. Who knew that my character was on the receiving end of the action. I got beaten for the entire time during the first week of filming!” said Chrissie.

Kevin revealed that his character was mean and he had to slap Chrissie forcefully and repeatedly. “After the first take of slapping which could be heard by everyone on set, she already looked quite faint but Master Yuen wanted me to redo the scene with even greater force. My heart almost fell out during the retake as Chrissie’s face was already red and swollen [from the slaps], so I had Master Yuen take a look at her face. He is really strict when it comes to action scenes; it’s equally tortuous for the one taking the beating and the one doing it!”

The film, which will also be released theatrically in the United States, also stars Michelle Yeoh (楊紫瓊) and Thai actor, Tony Jaa.