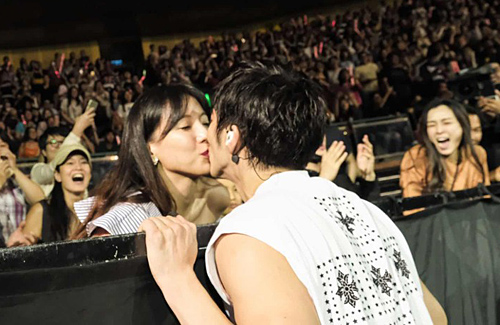 Leehom Wang’s (王力宏) “Descendants of the Dragon 2060” <龍的傳人2060> concert tour is finally coming to an end after touring around Asia. He is very grateful for his family’s constant support, especially towards his wife Lee Jinglei (李靚蕾) for taking care of his three children and allowing him to focus on his concert tour.

As Leehom reaches the end of his tour, he is already missing the wonderful experience he had. Although happy with the concert results, he does not intend on opening a few more surprise concert sessions. He is very grateful for his team, and especially thankful for his family.

In his thank you speech, Leehom said, “I want to thank my parents. After becoming a dad myself, I realize the amount of love and effort they gave to me. As well, I want to thank my wife Jinglei because without her, I would not have all the happiness in the world.”

After professing his love for his family, Leehom ran over to kiss his wife who was sitting in the VIP seat section. Leehom’s gesture made the crowd cheer loudly over the couple’s sweetness.

His friends from the entertainment industry also came to support Leehom in his Taipei concert, including Barbie Hsu (徐熙媛) and her husband; and David Tao (陶喆) and his wife. Malaysian Chinese hip hop artiste Namewee (黃明志) was a guest performer at the concert. Newlywed Lin Chiling (林志玲) also sent flowers to support Leehom’s concert success. 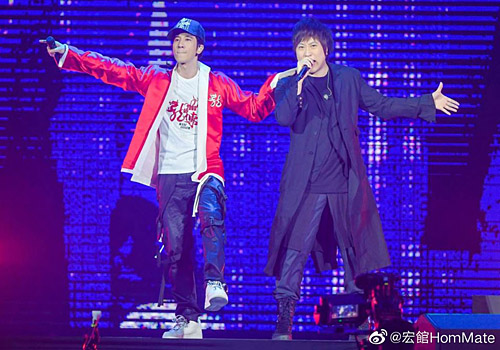 It’s already been seven years since Leehom has performed for the Hong Kong audience, but he will be singing for two nights on November 1 and 2. He is very excited to be bringing his entire family because his wife loves Hong Kong, so it would be an opportunity to have a small family vacation.

Asked if he will be kissing his wife at the Hong Kong Coliseum, he responded, “This is a first time. I couldn’t do it in a few shows because of the stage design. But obviously when you see someone so beautiful, you would want to run over to her!”

1 comment to Leehom Wang Kisses Wife at His Concert