Linda Chung Holds Wedding in Vancouver: “I Love Him” 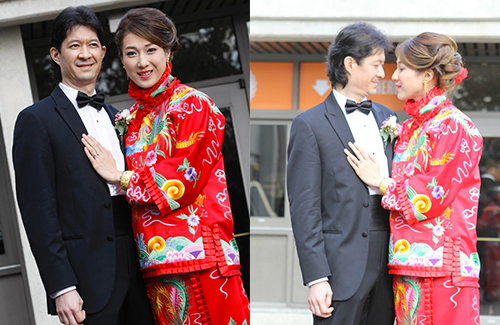 It was a simple yet beautiful wedding banquet for Linda and Jeremy. The wedding, which was held at a rather humble venue in Vancouver on February 27, was uncomplicated. There was no wedding door game to prank the groom and no crazy after-party. Linda didn’t even prepare her wedding vows until the morning of. Linda’s self-composed song “I’m Married” <我結婚了>, which has lyrics written by Wong Cho-lam (王祖藍), was played at the wedding, but Linda did not perform it.

Linda: “I Love Him”, Hints at Pregnancy

Though the couple have only known each other for ten months, Linda said the decision to get married was not sudden. “On the fourth day we met, I already saw him as my husband, and he saw me as his wife. I love him.”

Reportedly five months pregnant, Linda was asked by reporters if she would be expecting her first child with Jeremy soon. Her response was rather obvious.

“Because of Chinese tradition, I cannot say anything about the baby,” she said. “I feel that it is too early, but I will announce it when the time is right. I will not say anything more.”

But when she was asked about how many kids she plans on having, Linda’s answer was not modest at all.

“Four!” Upon seeing the reporters’ shocked faces, Linda laughed and said, “Is that too much? I didn’t say this, my husband said it! But I will cooperate.”

The press then asked Linda to share details about how Jeremy proposed, but Linda declined with a laugh. “There are too many details to recall, and my husband doesn’t like me talking about it. But it was very sweet. He proposed at a place where there were many lights. He did everything. It was actually kind of comedic.”

When speaking about Jeremy’s positive qualities, Linda said, “He has too much! I truly love him, so much, and he really takes care of me.”

After a moment of thought, Linda said she admires Jeremy’s maturity, kindness, and courage. “Privacy is very important to him, but yet today he is willing to hold my hand and greet the public with a huge smile. Jeremy doesn’t even like taking selfies… but he does love children and is extremely filial. My parents adore him, so he is my Mr. Right!”

No Honeymoon After Wedding

Linda’s marriage and rumored pregnancy has raised questions about whether or not the TVB actress would retire from the entertainment industry. But Linda gave a big fat no, expressing that she loves her job and has no plans on quitting. She stressed that she still has a contract with TVB and plans on releasing her new studio album sometime this year.

Asking if Linda would be holding a second wedding ceremony in Hong Kong, Linda said, “No. Weddings are actually very tiring. It hurts my head.” Would they have a honeymoon after the wedding? “No,” said Linda again. “I’ll stay here [in Vancouver] and learn how to cook and help around the house.” 31 comments to Linda Chung Holds Wedding in Vancouver: “I Love Him”