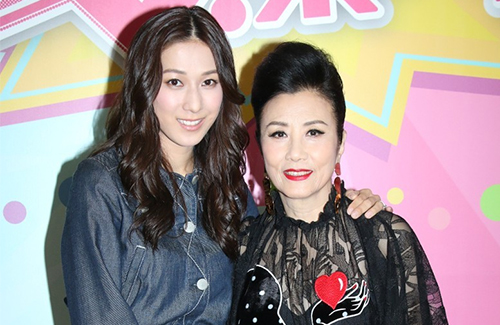 Linda Chung (鍾嘉欣) made a rare appearance in Hong Kong yesterday to film TVB’s new variety show Liza’s Online <娛樂大家> hosted by Liza Wang (汪明荃). The TVB actress, whose last official TVB appearance was for the 2018 TV drama Another Era <再創世紀>, said she agreed to do the show for Liza Wang.

“My last TVB project was over a year ago, doing a dubbing job for Another Era,” said Linda. “But it’s been over three years since I last made a public appearance for a TVB program. I’m really happy today. I get to see Liza again and many other colleagues.”

It was Herman Ho (何哲圖), CEO of Linda’s former record label Voice Entertainment, who asked Linda to return. Linda will be staying in Hong Kong for three weeks.

“I brought my son with me,” shared Linda. “My daughter will also be coming later, with my husband.”

Asking if Linda is also in talks to do another TV drama, she said, “I won’t be doing that in the meantime. My son is still very young, but if I come across a script I like and the times are suitable, I may consider to make a comeback. I still enjoy acting and my husband is very supportive.”

Linda’s on-and-off hiatus in the industry started in 2016 when she welcomed her daughter Kelly in Vancouver. In August 2018, Linda gave birth to her second child, son Jared.