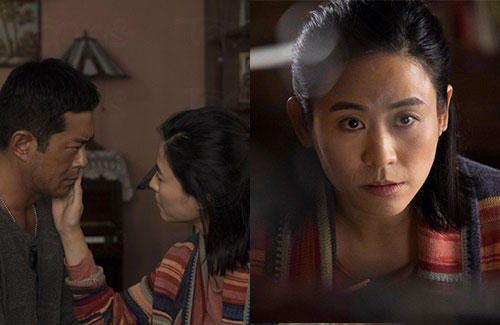 Louis Koo (古天樂) and Jessica Hsuan’s (宣萱) last collaboration was TVB’s A Step into the Past <尋秦記>, which aired in 2001. 17 years later, the popular onscreen couple reunited for the TVB’s drama’s film sequel, but also for a new film—A Witness Out of the Blue <犯罪現場>—which will start showing in theaters Saturday.

Louis plays a wanted criminal who rents a room in Jessica’s apartment to avoid authorities. Jessica, whose character is legally blind, described Louis’ character as “strange.” She joked, “He’s actually like the real man himself. They don’t have much to say.”

Their relationship is ambiguous and filled with sexual tension. “On the surface, they act like there’s nothing, but in the air, you can feel that something is there, but nothing ends up happening. In many romance arcs, or even real-life dating, nothing gets as interesting as that period of ambiguity.”

But their relationship in the movie isn’t just happiness and fluff. In one scene, Louis attempts to kills Jessica by strangling her in the neck with a raincoat. Louis said, “She was very professional. The director said that Jessica could yell cut at any time if she felt pain. But she never said anything and continued with the scene. I was pleasantly surprised.”

Jessica said with a laugh, “I was actually really frightened, but I understand Louis. Once he shoots an action scene, he is completely in the mode. The director thought about using a stunt double, but I wanted to do it myself, because that would make it more realistic. It could completed in one shot. I was pretty nervous. We shot it three times, and I actually heard a crack in my neck, but I stuck through it.”

She added, “When Louis started the scene, it got pretty scary, but fortunately, we finished the scene successfully. I’ve done action scenes before, so I understand that sometimes you have to really do it.”

TAGS: A Witness Out of the Blue, Jessica Hsuan, Louis Koo