Louis Koo, Jessica Hsuan Finish Filming “A Witness Out of the Blue” 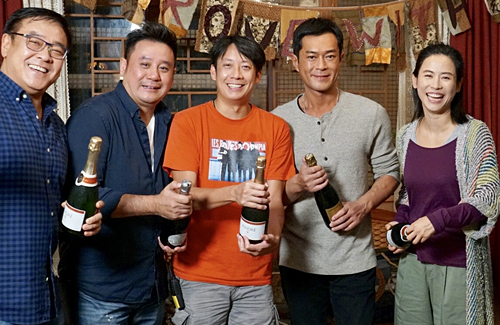 Hong Kong movie, A Witness Out of the Blue <犯罪現場>, finally concluded filming. Working together for the past three months, the cast was thrilled and popped champagne to celebrate. Although the celebration occurred late in the night, Louis Koo (古天樂), Jessica Hsuan (宣萱), Philip Keung (姜皓文), Evergreen Mak (麥長青), and Power Chan (陳國邦) were there.

After the champagne, the cast still had one final scene to film. Jessica, who has a low alcohol tolerance, was already slightly intoxicated. She shared, “When we were drinking at first, I was fine. Later, Louis came over and poured me another large glass. We drank it all, and that’s when things went downhill. I was giggling uncontrollably like a mad woman! Who knew that filming the scene afterwards would turn out so well. The scene was about me having visual impairment. After drinking, my eyes were a little unfocused, so it looked very realistic. The director even teased that if he knew, he would’ve had me drink a little alcohol before filming each time!”

Jessica and Louis were touted as the golden television couple in the late 1990s. Despite the many years they have not collaborated in a project together, they retained their on-screen chemistry. Jessica shared, “I was a little worried when we first began filming. Louis is very serious when he’s on set. After two days of filming, I realized that Louis is still Louis. No matter what happens, we would talk about it, so everything proceeded smoothly and I was comfortable.”

A Witness Out of the Blue is produced by Derek Yee (爾冬陞) and directed by Fung Chi Keung (馮志強).

TAGS: A Witness Out of the Blue, Jessica Hsuan, Louis Koo

10 comments to Louis Koo, Jessica Hsuan Finish Filming “A Witness Out of the Blue”