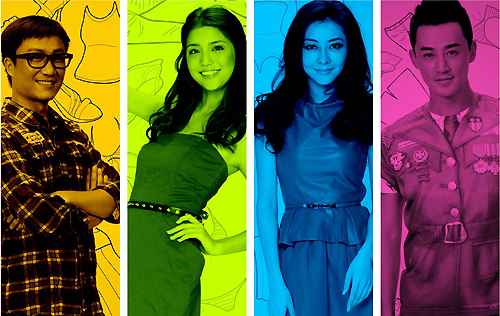 The film is set in the backdrop of an undergarment design company. Raymond Wong attempt to reconcile with ex-lover, Hai Qing, but she deliberately makes life difficult for him. Hai Qing wants Raymond Wong to design a collection of women apparel which centers on the theme of “Men Are Like Clothes.” Raymond Wong then engages Lynn to design the fashion wear. However, Teresa and Karena, who play mother and daughter, feel threatened when Lynn joins the company. They join forces with Raymond Lam in the power struggle, in which he later falls in love with Lynn.

Men as the Weaker Parties In film trailer, the female characters take control and twist the men around. Raymond Wong begs his ex-lover to return to him, while being tricked by Hai Qing to dance the Samba.

In order to win Karena’s heart, Ronald personally sends breakfast to her, but is always snubbed by her mother who looks down on him.

Raymond Lam, who is misunderstood by Lynn, has no chance of defending himself. He is eventually dumped by Lynn.

Director Vincent Kuk (谷德昭) said, “This is a film which overturns the traditional saying of ‘Women are like clothes.’ It explores the society values of modern love and demonstrates women’s attitudes when they need to make choices. It portrays women’s independence and will definitely entertain the female audiences!”

Producer Raymond Wong also added, “This comedy not only features big stars, the film is positioned as a comedy for everyone. The selection of the cast is based on different ages of audiences. Different pairing of various age groups will create a marvelous chemical reaction. The audiences will be able to relate to it and have a good laugh, as it may embarrassingly occur on them.”