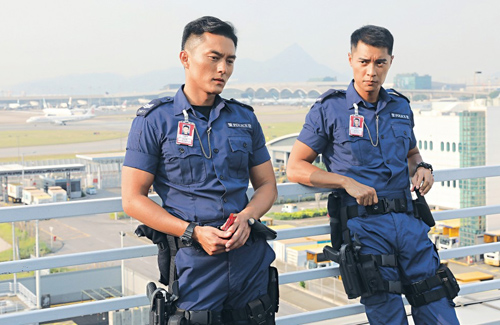 Following the trials and tribulations of the airport security unit and the effort they put in to protect the public, the beginning of Airport Strikers <機場特警> was extremely exciting with many action scenes. In a training scene, Hugo Wong (黃子恆), Mat Yeung (揚明), Owen Cheung (張振朗), and Jackson Lai (黎振燁) flexed their muscles and glistened with sweat as they ran up the mountain. Mat Yeung, who plays the role of an airport police sergeant, seemed to be the most in shape.

Other than the male actors, the female leads also take on many action scenes and have the chance to show off their hard earned physiques. Sisley Choi (蔡思貝) parted with her long hair that she had been growing out for three years and tried a pixie cut for this role. Her first scene depicted her being held hostage by a fugitive trying to escape the airport. She was able to take him down and disarm him a few quick moves showing off her agility. Due to her lanky and toned build, Sisley is quite convincing as a police officer.