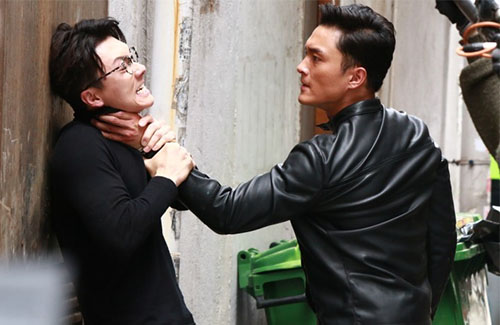 A few days ago, the main stars of TVB’s upcoming action drama Fist Fight <兄弟> were seen shooting an intense alleyway scene in the streets of Sham Tsui Po. The said scene involved Mat Yeung (楊明) and Vincent Wong (王浩信) having an argument, with Mat holding onto Vincent’s collar and nearly crushing his neck. Philip Ng (伍允龍) comes in time to stop their fight from escalating.

Vincent was gasping for breath in the scene; Mat had held onto his neck so hard, veins were popping out of his neck.

When reporters pointed out their concerns for Vincent’s safety after the scene, the Best Actor nominee said it was done on purpose. “We’ve been filming together for a few months already, and we’ve gotten really close. When it comes to these kind of action scenes, we had to be very careful. Mat actually didn’t do a very strong grip. It was my doing. I pushed his hand closer to my neck to the point where I started to get that dizzy sensation. I wanted it to look more realistic.”

“It’s huge pressure,” said Mat. “I was really worried that I’d hurt him. I’ve once injured Jack Hui (許家傑) before when we shot Momentary Lapse of Reason <收規華>.”

At the mention of his girlfriend Lisa Ch’ng (莊思明), who celebrated her 31st birthday a few weeks ago, Matt said he gave her an “ordinary gift” when reporters tried to ask more details about how he celebrated her birthday.

Asking if Philip has already accepted Tiffany as his student, the action star said, “She’s become an unofficial student. She’s very hardworking and athletic. Perhaps that’s because she was a competitive basketball player. She’s a very fast learner, too.“