May Chan Takes on Aerial Yoga 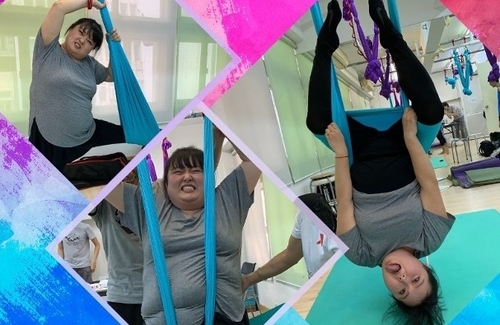 Recently, artist May Chan (陳嘉佳) filmed an educational promotional video for the Strategy and Action Plan to Prevent and Control Non-Communicable Diseases in Hong Kong <邁向2025：香港非傳染病防控策略及行動計劃> to encourage healthy living habits and address dietary myths. In the video, May donned sportswear and tackled both regular and aerial yoga in front of the camera. Although she deliberately took the time to train beforehand to avoid being embarrassed, May’s flexibility was visibly mediocre.

The 34-year-old actress, who boasted having experience in hot yoga, was covered in sweat after completing a single movement. Though she appeared stiff when bending backward and showcased distorted expressions, May did not back down. She attempted aerial yoga after regular yoga, but it proved to be quite challenging. The on-site staff couldn’t help but laugh at May’s exaggerated expressions of pain and fright. Despite failing miserably in aerial yoga, May successfully spread happiness all around her.

After about an hour, the star claimed she is now addicted to aerial yoga. She added that the shoot inspired her to exercise more in the future. “I shot this video with a nutritionist, so I asked a lot of health questions during the break,” May shared. “Exercise is really helpful, and it’s best to exercise at least three times a week.”

She continued, “But everyone knows that I am heavy, so doing intense exercises or running for too long may not be good for my knees. So the nutritionist advised me to do more yoga. In addition to training my breathing, balance, and flexibility, some movements can relieve strain.”

Although May previously did hot yoga, she stopped going to the classes because it was a waste of her money. “I thought it was too comfortable and fell asleep a few times during class,” she explained.

5 comments to May Chan Takes on Aerial Yoga