Michael Tse Drinks His Own Urine in “Survivor Games” 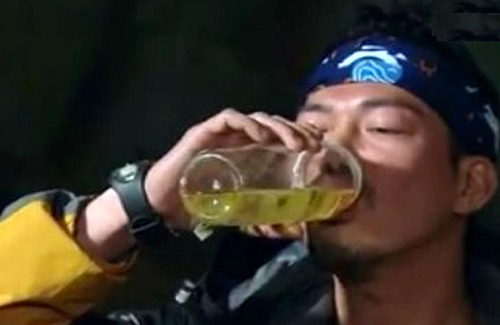 It’s been almost three years since Michael Tse (謝天華) left the station that gave him Laughing Gor, the role that shot the 48-year-old to unprecedented fame in 2009. His last drama with TVB, 2013’s Sniper Standoff <神鎗狙擊>, performed fairly well in ratings; it was an amicable split for Michael and TVB.

While many Hong Kong viewers and TVB fans miss seeing “Laughing Sir” on screen, the actor said he wanted to make the most of his “freedom” and try other projects available for him. His success as Laughing Sir in turn gave him only limited options, as he was typecast in stern, crime-fighting roles. After leaving TVB, Michael tackled a variety of different characters in other television dramas. He also went back into singing, and is currently starring in the Chinese survival reality series Survivor Games <跟著貝爾去冒險>, which is hosted by British adventure Bear Grylls, known for his television series, Man vs. Wild.

In Survivor Games, which also stars Taiwanese actress Janine Chang (張鈞甯), The Journey of Flower’s <花千骨> Andy Zhang (張丹峰) and more, are sent on a survival trip, where they are to live for a few days with limited supplies. In the final episode, Bear Grylls asked each guest on the show to urinate in a plastic bottle, and then drink their urine the following day.

While many artists struggled with the task, Michael appeared relatively calm when he drank his own urine. He drank it all in one setting.

“It’s absolutely disgusting,” he said, “but in a situation where there’s no other option, you’re going to have to face it. This was the message that Bear was trying to get across.”

Asking for his thoughts about drinking his own urine, Michael said, “The smell was horrible, but once I knew it was my own, I didn’t find it all that difficult to get through. I didn’t do much pondering; I drank it quickly to get it over with.”