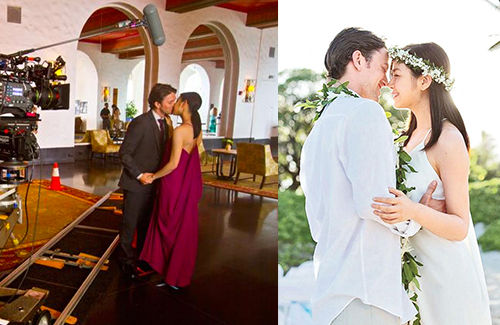 Taiwanese actress Michelle Chen (陳妍希) is garnering rave reviews from critics with her performance in the romantic thriller Pali Road <夏威夷之戀>, a co-production between the United States and China.

The movie, directed by Jonathan Lim, stars Michelle as Lily, a young doctor who wakes up from a car accident and finds herself living in a completely different life which she does not remember. The movie also stars Twilight star Jackson Rathbone and Korean American actor Sung Kang.

Shot in Hawaii, Pali Road had its world premiere at the Hawaiian International Film Festival and was nominated for Best Feature Film at the Los Angeles Asian Pacific Film Festival. Michelle herself won Best Actress, and received the “International Star Award” with Sung Kang.

Pali Road is currently showing in cinemas across the United States.

Michelle said she had “many firsts” while making this film. Pali Road is her first English-language movie, her first movie with a Hollywood crew, and her first attempt at doing a thriller. She is happy to see the movie garnering positive results at film festivals. Michelle also had many intimate scenes with Jackson Rathbone, and remarked that those scenes were also another breakthrough for her.

14 comments to Michelle Chen Breaks into Hollywood with “Pali Road”