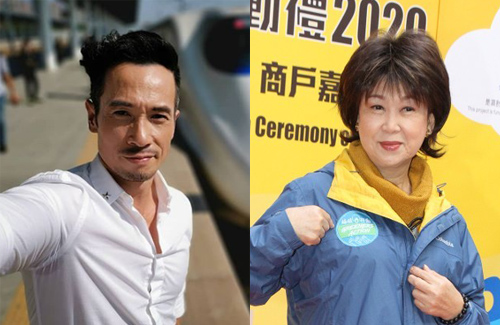 The Armed Reaction <陀槍師姐> drama franchise was one of TVB’s most successful police series in the last decade. Hoping to revive the franchise, TVB will be filming the fifth installment in February with several returning cast members. Moses Chan (陳豪) will be the new male lead.

At a promotional event, Mimi Chu (朱咪咪) revealed that she had a very busy work schedule this year. Having just flown back to Hong Kong from Los Angeles, Mimi shared that she will continue to fly to Singapore and Kuala Lumpur for stage performances before returning to Hong Kong for the Lunar New Year. Despite her busy schedule, Mimi is happy to be working as she provided details of her Los Angeles performances and announced that she will be appearing in the sequel Armed Reaction 5 <陀槍師姐V>.

It has been two years since Mimi return to film a drama with TVB, but Mimi will reprise her role as Wong Yee Mui in Armed Reaction 5. Mimi explained that the sequel will not star Bobby Au Yeung (歐陽震華) and Esther Kwan (關詠荷), “The main male lead will be Moses Chan (陳豪). I heard Joyce Tang (滕麗名) will also be in the drama.”

The media asked if Marco Ngai (魏駿傑) will play a role in the sequel, Mimi laughed and replied, “How is it possible?”

As there were rumors that TVB has been cutting artistes’ fees, Mimi was asked if she was affected. “No way, I’m such a beautiful woman. They can’t reduce it. They actually increased it a little. Honestly, you can’t really depend on TVB to make a living. It’s not even enough for gas. I charge a high fee for my appearances in United States and Canada. I rely on dramas as a platform to promote myself. It’s mutually beneficial.”

Recently traveling to Los Angeles to perform as a guest for Wayne Lai’s (黎耀祥) concert, Mimi said, “Although I acted as Wayne’s mom once, I was his guest for his first concert. I haven’t seen him for a year or two, but we have great chemistry.”

The two artistes are comfortable joking with each mother, and Mimi shared Wayne’s plan to help Mimi get the TV Queen title. “I told him that I was envious how he was the TV King and how I wanted to be the TV Queen. He ended up telling me that he will go to the pharmacy and help me buy morning-after pills [事後],” the actress laughed as she alluded to the Cantonese homophone for TV Queen.

18 comments to Moses Chan to Star in “Armed Reaction 5”