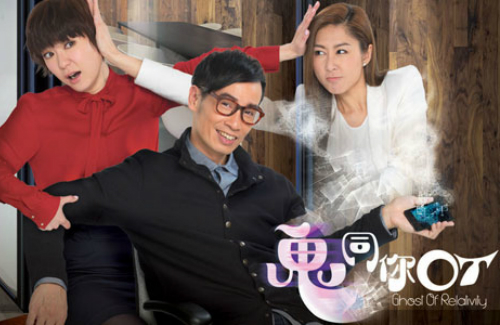 TVB supernatural series Ghost of Relativity <鬼同你OT > completed its run two weeks ago and is currently the highest rated series of the year. Its cast members, including Moses Chan (陳豪), Kristal Tin (田蕊妮), Nancy Wu (胡定欣), and Vivien Yeo (楊秀惠), earlier attended a celebration party for the good results. The artistes joked that they should film a comedic spin-off of the series.

Moses laughed and expressed, “Even this unpopular type of theme garnered great results, which means that there’s room for development! We can stretch the theme even further, and make it a historical comedy with a martial arts component. The title could be ‘King Works Overtime With You’!” [Literal translation of Ghost of Relativity’s Chinese title is Ghost Works Overtime With You]

When asked if he has confidence in winning the Best Actor Award this year, Moses exclaimed, “I’m not going to think about that, but Kristal and Nancy were really strong! I’m voting them for TV Queen!” Kristal also expressed humbly, “I never thought about [the award]. It’s only mid-August! I’m going to focus on filming Brother’s Keeper 2 <巨輪II > for now!” Speaking of Moses’ suggested historical sequel, she added, “That’s not a really good idea. Historical dramas are too tedious!”

On the other hand, Nancy also enjoyed the series and is disappointed that it has finished airing. She hopes the original cast could gather again for a sequel. However, she jokingly exclaimed, “I don’t want it to be titled ‘working overtime’ again! We always worked overtime during filming. Why not call the sequel ‘Ghost Eats With You’ instead?”