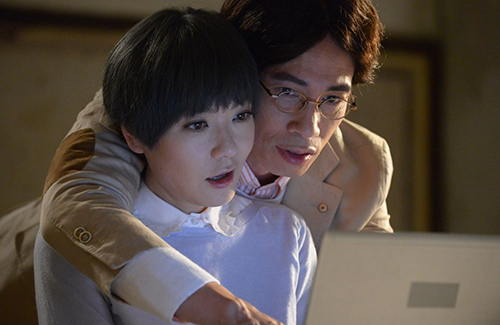 My Lover from the Planet Meow <來自喵喵星的妳> has just broken a record, but it’s not one worth celebrating.

According to the latest ratings report released by Nielsen, episodes 8 through 12 of the TVB anniversary drama My Lover from the Planet Meow averaged 21 points—putting it at less than 1.4 million people watching per episode. Episode 13, which aired on Saturday, dropped even lower to 16 points, pulling in only 1.04 million viewers. It is the lowest rating TVB has ever seen for a TVB anniversary drama.

My Lover from the Planet Meow is the sister production to last year’s Ghost of Relativity <鬼同你OT>, 2015’s highest-rated drama. Planet Meow sees the return of Kristal Tin (田蕊妮), Nancy Wu (胡定欣), and Moses Chan (陳豪) in the lead. The show centers on Kristal’s character Miu Miu, an alien cat who takes up a human form to help her old masters.

The show is plagued with criticism, ranging from the sloppy, unfunny script to Kristal’s odd portrayal of Miu Miu. Netizens have been particularly harsh on Kristal, who was criticized for being too old to play her role.

“She’s 40 and trying to act cute,” a netizen spat. One netizen suggested, “I rather see Eliza Sam (岑麗香) doing the role.”

Planet Meow’s competitor, Two Steps from Heaven <幕後玩家>, is faring a little better in comparison. While the show was criticized for being unrealistic, it did manage to break 23 points on its first week of broadcast. Episode 7 pulled in a higher rating of 25.6, reaching 1.66 million viewers.

My Lover from the Planet Meow will air its series finale on November 18. TVB’s last anniversary drama, Dead Wrong <致命復活>, will be replacing it.

TAGS: Kristal Tin, My Lover from the Planet Meow, Two Steps from Heaven