Myolie Wu Considers Having a Baby 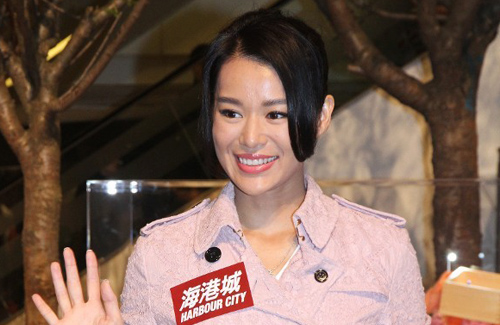 Having visited more than ten cities on her trip, Myolie was asked to pick her favorite destination. She immediately picked her first destination, Hokkaido, Japan. She recounted in delight, “It was my first time skiing and I fell so many times!” Apart from Hokkaido, Myolie also visited Tahiti, New Zealand, Los Angeles, New York, London, Belfast, Barcelona, the Aegean Sea (in Greece), Athens and the Maldives. Myolie revealed that she had put on some weight over the course of the honeymoon and started exercising when in Maldives, her last stop.

On married life, Myolie spoke about how she is still not used to being addressed as “Mrs. Lee”. At the bank the other day, it took her a while to respond to that name.

On the subject of children, Myolie avoided giving a direct answer and merely remarked that one of the child models at the event looked adorable. The reporters persisted and asked if Myolie had the opportunity to “make babies” while on the honeymoon. She said, “You’ll find out sooner or later about these things…many people have said that I should first focus on cultivating my health before trying.” Myolie added with a laugh, “I’m looking forward to [being a parent], but he’s not!” Myolie further expressed that she would, ideally, have at least two children. As to whether she would reduce her workload when she becomes a mother, Myolie hoped to juggle both her career and family responsibilities, “We’ll let nature take its course!”

Myolie celebrated Philip’s birthday while on the honeymoon. Myolie said that she had prepared a small gift for him on the actual day. She joked, “But the biggest gift of all is me! I gave myself to him.”

On the news that her ex-boyfriend Bosco Wong (黃宗澤) is dating a Japanese model Jun, Myolie said “The most important thing is that he must be happy, having found his other half.”

4 comments to Myolie Wu Considers Having a Baby