Myolie Wu is Having Another Boy 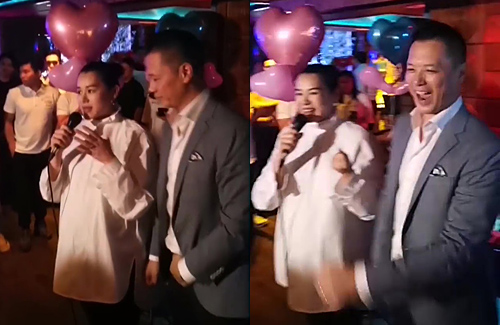 Myolie’s husband revealed on social media that the couple’s second baby will be another boy!

Married in 2015, Myolie Wu (胡杏兒) and husband Phillip Lee’s (李乘德) first child Brendan is almost two years old. Now pregnant with her second baby, the 39 year-old actress made her final public appearance before her delivery date in July at the opening of her husband’s restaurant in Central, Hong Kong.

Drastically reducing her workload months ago to prepare for her impending due date, Myolie has been sharing frequent pregnancy updates. Recently, Myolie’s friends uploaded a video of her appearing beside Phil at his restaurant opening. At the dimly lit location where heart-shaped pink balloons could be seen in the background, a heavily pregnant Myolie said in good spirits to the crowd, “Of course, I must support my hubby!” Claps and and cheers could be heard before she finished her sentence, and Philip was seen beamed proudly from ear-to-ear.

Previously, Myolie had kept the baby’s gender a secret from even close friends. Many have guessed that it would be a girl since Myolie hinted that she would have to get new clothes. However, Philip has announced the answer by posting an emoji of a boy against a blue background in an Instagram update.

4 comments to Myolie Wu is Having Another Boy