Nancy Wu, Annie Liu, and Chrissie Chau in “Beyond the Realm of Conscience 2” 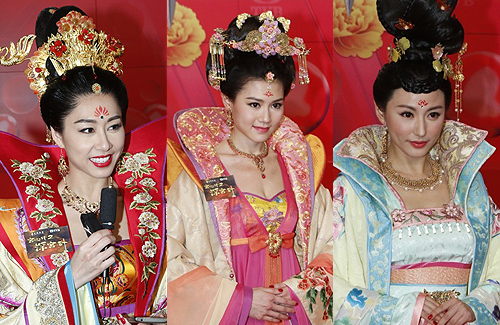 Hoping to live up to its predecessor, Beyond the Realm of Conscience 2 (宮心計2深宮計) features Steven Ma (馬浚偉), Nancy Wu (胡定欣), Annie Liu (劉心悠), and Chrissie Chau (周秀娜). The cast attended a press conference to promote the upcoming grand production. Notorious for her voluptuous figure, Chrissie’s outfit was by the far most risqué and showed off her cleavage.

Chrissie expressed, “This [outfit] is worn after I have a child [in the drama]. This is the reason why [the outfit is so busty], so it can have more of a voluminous look.” Standing beside Chrissie in a much more modest costume, Annie’s appearance was more refined and princess-like. “The neckline [for my outfit] is flat. Producer Mui Siu Ching (梅小青) said that it is okay as long as the outfit is pretty!”

Starring as a empress in the drama, Nancy’s outfit was much more exquisite. Due to the hairstyle during the Tang Dynasty, Nancy wore a heavy neck piece and shared it made her neck hurt. “We even talked about maybe putting a massage chair at work!” In addition to the costume, Nancy sought out other ways to appear more lady-like for the role. “I have to be more proper and keep my skin pale! I also need to lose some muscle!”

With recent reports claiming that she is currently dating Ruco Chan (陳展鵬), Nancy allegedly renewed her rental contract in order to live in the same neighborhood as Ruco. Nancy exasperatedly joked that she will need to work harder and earn more money before being able to purchase a home. She added, “Besides, many coworkers also live in that neighborhood! It’s close to work.”

13 comments to Nancy Wu, Annie Liu, and Chrissie Chau in “Beyond the Realm of Conscience 2”