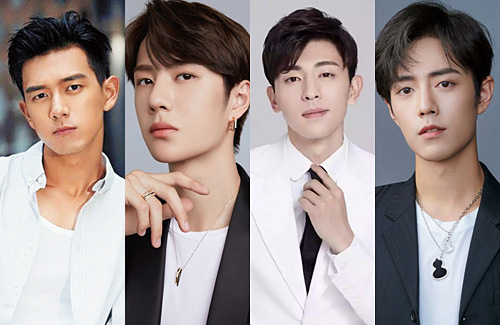 Similar to Deng Lun and Li Xian, Yang Yang and Li Yifeng came into recognition and experienced boosts in popularity through their idol dramas. Yifeng succeeded with his performance in The Sword of Legends <古劍奇譚> in 2014, and swooped many most popular and most valuable actor awards. Possessing a college senior feeling, Yifeng was considered the nation’s school prince and had a huge fanbase. However now 32, he no longer presents such a feeling, and adding to the lack of drama productions since 2016, his popularity has decreased significantly.

Yang Yang also experienced the same situation with his breakout role in Love O2O <微微一笑很傾城>. But after a year, his comeback with Martial Universe <武動乾坤> had poor rating results. Despite a fall in popularity, the actor is starting to explore more diversified roles such as in military idol drama The Glory of the Special Forces <特戰榮耀>.

Both Kris and Luhan first gained fame through their involvement in Korean pop group EXO. Afterward, they launched successful solo careers in China. Kris concentrated on movies and music, while Luhan focused on dramas and variety shows. Although their projects are abundant, none of their recent works is considered to be a major hit. Besides, they are no longer considered “Little Fresh Meat” as they are approaching 30.

The new generation of actors all have their own representative works. Deng Lun is well-loved after his performance in Ashes of Love <香蜜沉沉燼如霜> and has 35 million Weibo followers. Li Xian is currently China’s hottest idol actor after Go Go Squid <親愛的熱愛的>, and Xiao Zhan and Yibo are highly shipped for their bromance in The Untamed <陳情令>.

9 comments to New Generation of Rising Actors in China