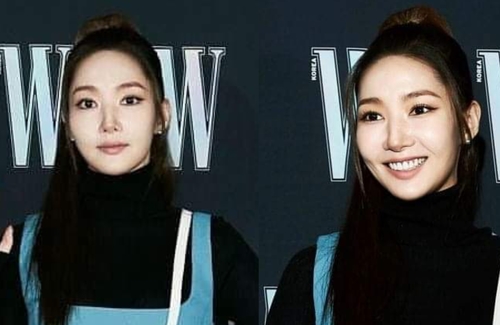 Park Min Young‘s appearance at yesterday’s W Korea’s breast cancer awareness campaign, “LOVE YOUR W,” is generating a lot of buzz. Netizens were shocked by the 34-year-old’s weird-looking nose in the photos released by the organizer, spurring speculations that the Hallyu actress underwent plastic surgery again. 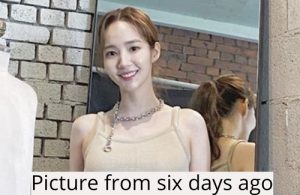 Dressed in a teal-colored dress with a black turtleneck underneath, Min Young looked fashionable and glamorous. However, her nose stole the show, and it became the highlight of discussion as a netizen wondered if a tweaking procedure had gone wrong. On the other hand, some believed that her nose looked off because of the lighting and bad camera angles. They even pulled out a photo that Min Young posted on Instagram six days ago to prove that she still looked the same.

In the past, Min Young, who is known for possessing an angelic face and a hot figure, confidently admitted that she is an acquired beauty and not the natural beauty that everyone assumed. Although fans gave her the title of “smiling goddess” due to her charming eye smile, Min Young revealed that she had gotten double eyelid surgery. She also went under the knife for her nasal bone to fix her crooked nose because her mom wanted her to look beautiful.

Although such revelation is usually met with criticism and backlash, the actress is one of the lucky ones, as it did not affect her popularity. Instead, her open-minded attitude was positively received and appreciated by the public. She even joked that she is “suitable for plastic surgery” because the results looked natural, there were no bad side effects, and she recovered super fast.