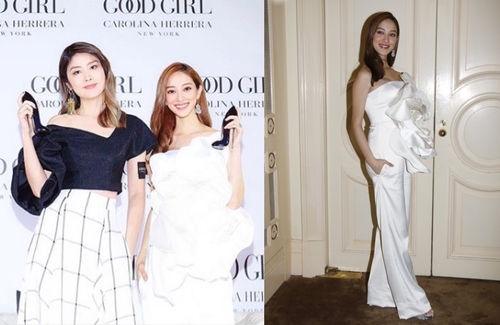 Grace Chan (陳凱琳) made her first public appearance since announcing her pregnancy on Thanksgiving alongside Kelly Chen (陳慧琳 ) at Carolina Herrera’s perfume brand event today. Glowing in a white off-shoulder playsuit with a huge flower hiding her baby bump and four-inch heels, the mother-to-be easily stole the spotlight with her chic appearance. Grace’s pregnancy and mood swings also became the focal point.

Although the 27-year-old seemed both excited and nervous about her pregnancy, she exposed she developed mood swings. “I hope I can spend each day happily,” Grace shared, “so I have to find a way to release stress and make myself happier.”

Hearing this, Kelly chimed in and shared she was often sleepy and took naps frequently while pregnant. Curious, she asked how Grace’s mood fluctuates. To this, Grace replied, “Every day I have highs and lows frequently.”

For example, Grace would be watching a cartoon with husband Kevin Cheng (鄭嘉穎) and cry during the emotional scenes. However, Kevin calmly assured her, “It is normal for a pregnant woman to be emotional. You need to remember this feeling as an actress for you will have the opportunity to use it when filming.”

The actress revealed onstage that she still has a lot of characters she wants to play. She added she would continue working after giving birth. However, Kelly couldn’t help but interject, “You won’t want to act, it definitely won’t be possible. You won’t be able to part [with the baby], and you would not want to leave [the baby].”

Although Kelly contributed to the topic of Grace’s pregnancy during the event, Grace didn’t have the chance to ask Kelly for more pointers prior.  The young actress added, “but I’m really happy to meet her for the first time. I shared a joke with her earlier, and I think my husband mentioned it before, but Kevin would accidentally call me Kelly because our Chinese names are just off by one character. When I first met him, I let it go because I don’t mind being Kelly, but the third time he called me Kelly, I said, ‘Um, do you know my name is actually Grace?’”

Will Give Birth in Hong Kong

When reporters asked if Kevin is treating her like a queen, Grace shared her husband is more careful and considerate now. Though, she added she is not too spoiled to begin with, and would not ask him to fetch her food at weird hours. “I am afraid to – I am afraid I’ll have to return the favor,” she said.

The actress also shared she will accompany her husband abroad for work in December as an excuse to go on a trip if it is safe. Grace said it has been over three months and her pregnancy is stable. However, she kept the news under wraps because she still needed to “cooperate” with the doctor. When asked if she was already pregnant when she got married, she chose not to respond.

Despite wearing an outfit that hides her bump, she shared she is already showing because she is naturally skinny. Although her outfit is on the sexier side, especially paired with the heels, which she only switched into when she arrived at the event, she said, “I’m very sensitive when I go out these days, and people look at my body specifically my waist or [chest].”

When mentioning Ben Wong (黃智賢) exposed Kevin shouted, “It’s so long,” while looking at the ultrasound, Grace already foresaw Ben telling his friends, so it wasn’t a surprise. Although they already know the baby’s gender, they will disclose it later on. The couple has already decided to have the baby in Hong Kong so it will be more convenient for their parents to take care of the baby. They will also let their parents come up with a Chinese name for their baby.