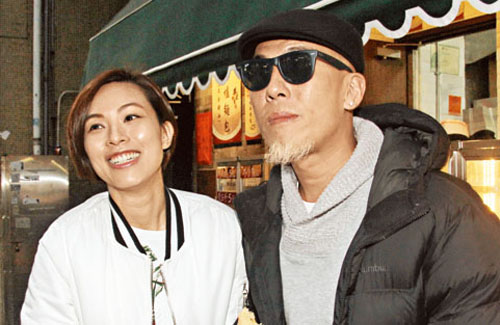 TVB actress Queenie Chu (朱慧敏) is now engaged! Queenie, who has been dating Eddie Pang (彭懷安) for over three years, said yes when the former EO2 member proposed to her today.

Eddie shared the good news on his personal blogs. He posted a romantic photo of him kissing Queenie’s forehead, and another photo of Eddie and Queenie holding each other’s hand, the engagement ring shining on Queenie’s finger.

Eddie wrote, “From now on, no matter if it’s in front of a grave or a person, right after you said ‘I do’, I said I will use my entire life to love you, to protect you, all the way till death. Chu, I love you!”

At an event last week, Queenie shared that Eddie once proposed to her in front of her mother’s grave, but Eddie did not kneel on one knee, and neither did he give her flowers. Queenie said no, and told Eddie to try again, this time with the flowers. Eddie also shared the wedding proposal tidbit to the media at a press conference for his film last week, where he said Queenie did not think he was romantic enough.

Queenie said they are currently discussing a date for their wedding, and revealed that it would not be this year.