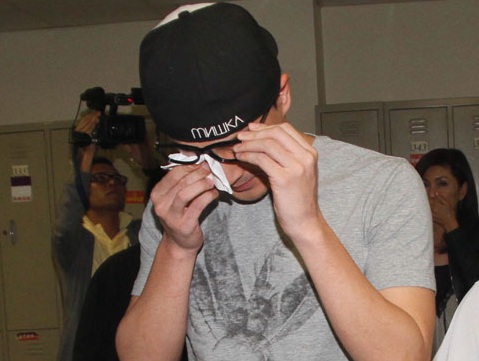 Raymond Lam Fung was originally scheduled to attend the praying ceremony for TVB series, Return to the Three Kingdoms <回到三國>. However, due to [music] recording requirements, Raymond could not appear at the prayer ceremony. Afterwards, while accompanied by his manager, Virginia Lok Yi Ling, Eric Tsang Chi Wai, and Return to the Three Kingdoms’ producer, Lau Ka Ho, Raymond appeared at TVB City.

Regarding claims that Raymond’s sexual video was circulating, he responded, “The incident has progressed to this stage…. I want to state that if I had hurt her [Mavis Pan Shuangshuang] while we were dating and if this were her revenge, I am willing to accept it. She is still young, I hope she can collect herself together.”

Did Raymond consider that his private photos were stolen? His eyes wet with tears, Raymond said, “I did not think of it. If two people truly loved each other, there is no need to reach this point. I am heartbroken.”

Jayne: Raymond believes that Mavis is behind the release of Mavis and Raymond’s bed photos, recent onslaught of his cheating rumors, etc.

From Mavis’ Next Magazine interview last week, she sounded like she was still pining for the lost love.   “Revenge” is also such a strong word. If Mavis was truly angry at Raymond and this was some elaborate revenge plan, why does she still wear the Hello Kitty watch that Raymond gave her? Why keep reminders of Raymond close and hurt herself more? To remind herself of the pain, to hurt Raymond and go down the destructive route together?

Love is full of hypocrisy, where a person who loves deeply can hurt their lovers just as deeply. I suspect it’s usually the people who like to keep score, who’s done more in the relationship, etc. to bear these grudges.

64 comments to Raymond Lam Cried, “I Am Willing to Accept Mavis Pan’s Revenge!”