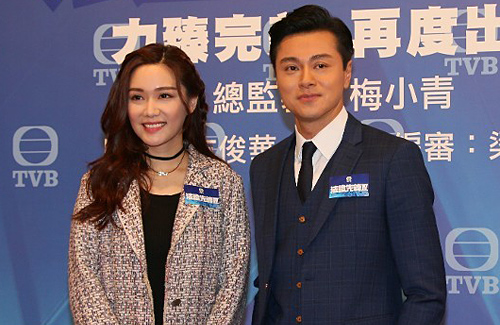 After discovered to be cheating with Andy Hui (許志安), Jacqueline Wong (黃心穎) fled to Los Angeles to avoid the public eye. However, the aftermath of the scandal led to public outrage and TVB’s decision to re-shoot Forensic Heroes 4 <法證先鋒IV>, replacing Jacqueline with Roxanne Tong (湯洛雯). All of Jacqueline’s scenes will be deleted and re-filmed, costing TVB an extra $10 million HKD to produce Forensic Heroes 4.

Today, the cast and crew attended a blessing ceremony to commence the re-shooting process. As a long time fan of the Forensic Heroes franchise, Roxanne is very excited to take part in the drama, but also feels the pressure. In order to prepare for the role, Roxanne has to lose 10 pounds, a goal she hasn’t accomplished yet. She said, “I need to eat better and exercise more to lose weight in a healthy manner. In terms of filming this drama, I want to turn pressure into motivation to give it my best.”

Raymond Wong (黃浩然) is very confident in Roxanne’s ability and experience. Since the re-shooting was very sudden, he will have to rebuild the onscreen chemistry as well.

The Aftermath for the Team

Many cast members were affected by Jacqueline’s scandal as many dramas/ programs featuring the actress had to be cancelled or filmed again. Raymond refused to comment on Jacqueline’s scandal, but he is grateful that Forensic Heroes 4 can still be released. Though re-shooting requires editing the script and scheduling, he believes the drama would still be successful. “Right now, I just want to focus on the drama and hope that the reshooting will be successful. I don’t think I am a victim, I just think it is a little unfortunate that our original work was wasted,” Raymond said.

Unlike Owen Cheung (張振朗) whose drama with Jacqueline, The Offliners <堅尼地愛堅離地>, has been put on hold, Raymond is very grateful that they can at least re-shoot the drama, which should take about three to four months.

Producer Miu Siu Ching (梅小青) said Forensic Heroes 4 was originally slated to be released during the TVB Anniversary at the end of the year, but the re-shooting will delay its broadcast date to January. Miu Siu Ching admitted that some scenes will not be able to be re-filmed, but she will utilize the opportunity to improve on scenes that can be redone. “This is a valuable experience. We will use $10 million HKD to re-film a drama. The company is great in supporting this drama. Thanks to all the cast and their helping out when we reached out.”