Ready for a Relationship? Ruco Chan’s Customized Car Stands Out in the Streets 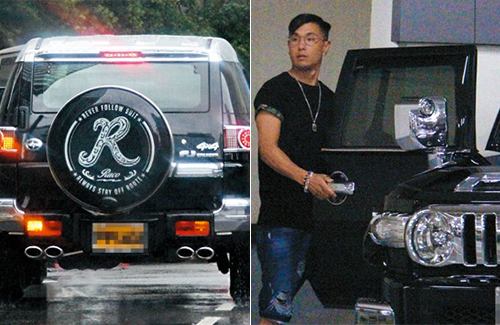 Ruco Chan (陳展鵬) said he would not deny about being in a relationship if he’s ever discovered to be in one, but from his debut till now, his only known ex-girlfriend was Miss Asia winner Eunice Yiu (姚佳雯). Ruco has had his fair share of dating rumors with Linda Chung (鍾嘉欣) and Ankie Beilke (貝安琪) over the years, but if they were ever true, neither Ruco nor the girls ever admitted to it.

Now that he can finally harvest the fruits of his career, it is not at all surprising to hear that the Best Actor hopeful is ready to put himself back in the market. “I’ve now taken a new step in my career,” said Ruco in an older interview. “If I have a girlfriend, I’ll definitely announce it! My fans aren’t against me dating—in fact, they’re always asking me when I’m going to get married and start a family. It’s just that I haven’t come across someone to do that with yet.”

Whether or not he’s really interested in getting a girlfriend or still prefers to live the bachelor life, the paparazzi can’t help but to notice that the 39-year-old actor has been a lot more showy and conspicuous with his appearances as of late.

Ruco, who is also a fan of amateur racing, owns a modified black Toyota FJ Cruiser which he customized with tinted windows and imported parts from Japan. The back of his cruiser hangs a spare tire cover, which is conspicuously decorated with the letter “R” for Ruco. His impressive yet funky cruiser is definitely hard to miss if you ever pass by it.

In addition to his flashy car, the paparazzi have also noted that Ruco has become a motorbiker, as he just recently passed his motorcycle driving test this past month. He may use this newfound skill for his upcoming drama, The Alliance <同盟>. Needless to say, the HK paps are actually quite impressed with Ruco’s updated appearances, saying that he’s finally ready to “pick up the girls.”

107 comments to Ready for a Relationship? Ruco Chan’s Customized Car Stands Out in the Streets