Reasons Why “Big White Duel” is a Hit 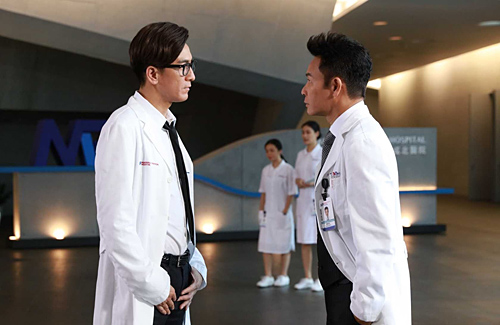 Big White Duel <白色強人> is fast becoming one of TVB’s top dramas of the year. With a strong cast and well-written plot, the drama is popular in both Hong Kong and Mainland China. Big White Duel even prompted many viewers to search for new episodes ahead of the broadcast date, and is a hot topic in online forums.

The emotional connection between the characters is one of the drama’s highlights. In episode 15, Natalie Tong’s (唐詩詠) character was suspected of contracting the Middle East Respiratory Syndrome after treating a patient and had symptoms of the disease.

When Natalie fainted, Kenneth Ma’s (馬國明) character did not hesitate to look after Natalie even at the risk of the disease being contagious. Many viewers were touched by Kenneth’s word, “Before the divorce, this woman waited for me every night and she waited too long. It’s enough, I don’t want her to wait for me anymore.” Moved by Kenneth’s acting, many Mainland Chinese viewers started a discussion on Weibo and hoped that the two characters would get back together.

In recent times, TVB tried to attract Mainland Chinese viewers by working with other production companies to film popular dramas, such as At the Threshold of an Era <創世紀>, Deep in the Realm of Conscience <宮心計2>, Line Walker: The Prelude <使徒行者2>, or focusing on police and crime themes. In doing so, the dramas tend to lose elements familiar to Hong Kong viewers while also failing to attract the viewers in Mainland China.

Unlike other medical dramas, Big White Duel focuses on medical reform issues, and dares to incorporate current political and social issues. However, as the drama is produced exclusively by TVB, the drama’s topic is too sensitive to broadcast on major channels in Mainland China. For example, in the recent episodes, it touched on the SARS incident back in 2003. During that time, a professor from Guangzhou spread the disease to tourists and locals after staying in a hotel in Hong Kong. As the SARS disease was a global epidemic, the Chinese government censored information of the incident and limited the information shared among the general public.

Despite the limited sources to view the drama, Big White Duel has proven to be a success and many Mainland Chinese fans are praising the wonderful plot and the realistic surgery procedures.

12 comments to Reasons Why “Big White Duel” is a Hit