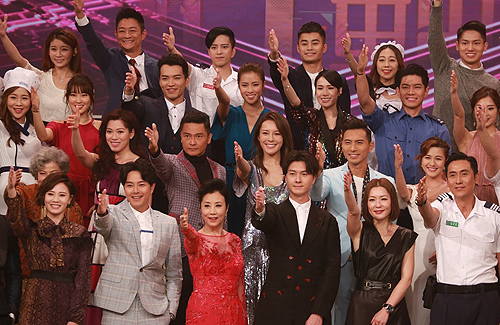 TVB kicked started its 51st anniversary celebrations with its annual lighting ceremony on October 14. A number of artistes gathered for the company’s event and stood in their arranged spots to pose for a big photo op. Rebecca Zhu’s (朱晨麗) lineup position in the first row, near TVB’s first generation fadan, Liza Wang (汪明荃), received a lot of attention as it indicates her rising prominence in the company. 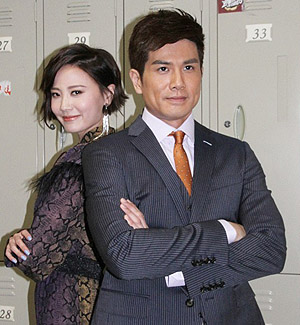 Rebecca, who will be in the upcoming anniversary drama Fist Fight <兄弟>, accepted an interview along with co-star Philip Ng (伍允龍). In response to her lineup position, Rebecca thanked TVB for giving her the opportunity and said she’s honored. As for the Best Actress award, she said she’d leave it up to fate.  “I care more about [Fist Fight’s] ratings; hopefully more people will watch it,” the actress said.

Philip shared they were filming for the series in England around this time last year. In fact, he had only filmed one scene with Rebecca before flying there for on-location shots. In addition, the cast went straight into shooting without getting the chance to shave or shower first. Rebecca added, “It was very smelly, and it was a romance scene. We filmed a proposal right after landing. Although we didn’t know each other, he already asked me to marry him.”

The two stars said the scene really tested their acting skills but did their best to grasp it. “I was thinking how should I do it?” Philip said. “Thankfully she was very tolerant with my acting.”

The actress expressed, “[Fist Fight] is worth looking out for because we really spent over half a year filming it and it was very challenging. There’s also a great group of actors – Vincent, Mat, Philip; everyone fights in there.”

After completing Fist Fight, Philip spent half a year resting and attended a meeting in the United States in addition to celebrating his parents’ birthdays. Philip will be staying in Hong Kong to promote the drama.