Rich Businessman Confirms: “I Took Photos of Him Law and William Chan!” 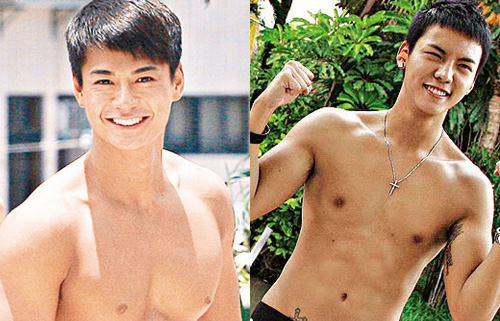 Wealthy businessman, Lau Ding Sing (劉定成), was currently being sued in a notorious case involving indecent assault and intimidation of 3 male actors and 1 fitness trainer. The court case led to the exposure of a list of 35 male actors and policemen who had willingly taken partially nude or fully nude photos for Mr. Lau. Although Mr. Lau said that he did not leak the list of 35 men to the media, he confirmed that the list was true! Mr. Lau said that he took photos of Him Law (羅仲謙) on 3 occasions, while stating that William Chan (陳偉霆) was also his model!

Yesterday was Mr. Lau’s 62nd birthday. The court case did not appear to dampen his mood, as he accepted an interview regarding the male actors who had modeled before him. With 100,000 photos in his private collection, Mr. Lau preferred young men with muscular bodies. He praised Him Law as being muscular and handsome. Although William Chan was initially not on the list of 35 actors revealed by Next Magazine, Mr. Lau blurted out that William had modeled for him several years ago!

Many of the 35 men on the list denied that they had ever posed for Mr. Lau, claiming that they did not know him. Mr. Lau confirmed that the list–which included Him Law, Bryon Pang (彭冠期), Benjamin Yuen(袁偉豪), and Stanley Cheung (張景淳)–was accurate! The list included 8 former Mr. Hong Kong participants as well as several Hong Kong police officers.

Mr. Lau did not feel that the men were ungrateful for denying that they had modeled for him. However, Mr. Lau–who had openly declared that he was gay–appeared to be a person who preferred to speak bluntly without pretense. He said that many of the male subjects posed for the photos for money and fame. They were all consenting adults. “You cannot force a cow to drink water!”

Photographed Him Law on 3 Occasions

Mr. Lau revealed that he had photographed Him Law on 3 occasions. However, on May 16th, Him Law’s management company, Filmko, stated that Him never posed fully nude in any photographs, or participated in unethical activities. Filmko indicated that Him was  not at the Police department for an investigation in relation to the court case. The company will contact the Police department to see if any of Mr. Lau’s photos of Him Law were due to work assignments.

EEG Claims William Chan Did not Model for Mr. Lau

Mr. Lau disclosed that William Chan had modeled for him several years ago. Mr. Lau appeared to remember William well, describing him as “young, smooth, cute, and sweet.” Mr. Lau declined to comment whether William’s photos were nude or not. He said that he was aware that William’s mother and elder sister had a clothing store on Flower Street many years ago.

EEG immediately issued a press statement claiming that William Chan had never modeled in Mr. Lau’s photos. EEG said that William did not know Mr. Lau. EEG maintained the right to pursue legal action over Mr. Lau’s claims, which were branded as false.

Mr. Lau possessed a preference for young men who had beautiful bodies from head to toe. He preferred men who had their own thoughts, was mature, and with quick reflexes. He enthusiastically discussed some of today’s hottest actors:

William Chan: He is very sweet, smooth, young, and cute. When shooting photos several years ago, his body was very thin.

Him Law: 40 inch chest. He is very muscular and handsome.

Edison Chen (陈冠希): He likes to photograph beautiful girls. He is not my cup of tea!

Raymond Lam (林峰): His age is a bit old. However, after so many years of working, he only has a 31 inch (chest).

Jayne: Mr. Lau appears to flaunt his photo collection, that he had photographed some very famous actors before they made it big. Although Next Magazine initially alluded that the 35 men had taken partially nude or fully nude photos, we do not know where Him, Benjamin, and William fall.

Given Mr. Lau’s preferences, he probably tried very hard to persuade his models to take it all off.

69 comments to Rich Businessman Confirms: “I Took Photos of Him Law and William Chan!”