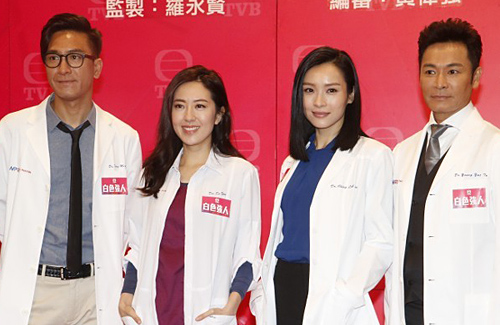 With many surgery scenes in the drama, Roger has been watching medical videos online to prepare for his role. At first, Roger was highly disturbed by the explicit details, but he grew more comfortable as he watched more surgery videos.

Acting as Ali’s mentor in the series, Roger has several moving scenes with her. Roger said, “At first, I was very happy to be paired with Ali, but it turns out she is in a love triangle with Kenneth and Natalie.”

Kenneth and Natalie portray a divorced couple. Since the frequent co-stars are also good friends in real life, they felt very comfortable to be working together again. Asked if his girlfriend Jacqueline Wong (黃心穎) would feel jealous, Kenneth said, “No, she knows what I’m filming and whom I’m working with. There’s no problem.”

Admitting that she is a big fan of Healing Hands <妙手仁心>, Natalie is very excited to be portraying a doctor in White Strongman. However, she has a very strong fear of blood. “One time, I fainted after I saw blood dripping from myself. I hope this won’t happen when I’m filming, but there will be a doctor on site to save me.” Kenneth helpfully volunteered that he has learned CPR, but never had the chance to use it.

Ali also has a fear of blood, but forced herself to watch violent movies to overcome her fear. “I was very scared of blood in the past, so I never thought of becoming a doctor. I’ll watch more surgery videos to observe the right mannerisms.”